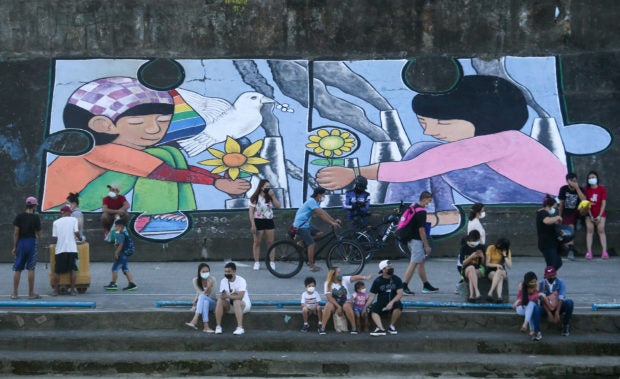 OUTDOOR FUN As restrictions for outdoor activities slowly ease, Marikina City residents and visitors take a breather at Marikina Riverbanks, with the “Pangarap Hindi Panaginip” mural by environmentalist AG Saño and other artists serving as their backdrop on All Saints’ Day. —LYN RILLON

MANILA, Philippines — Metro Manila is now ready for a more relaxed alert level 2 quarantine classification as all its 16 cities and lone municipality are at low risk of experiencing a surge in COVID-19 infections, the independent analytics and monitoring group OCTA Research said on Monday.

OCTA fellow Guido David explained that despite recording the highest number of cases nationwide because of its large population, Metro Manila was actually at low risk based on the average daily attack rate (Adar) in its 17 local governments.

“Navotas in particular is classified as very low risk, given that all its indicators (including Adar) are low,” David said in OCTA’s latest report presented to reporters on Monday.

“Based on our reading of the data, it’s actually safe to reopen our businesses at this time,” David said at the Laging Handa briefing.

The private sector has been calling for a shift in the second half of November to alert level 2, which will allow business establishments to operate up to half of their indoor capacity and 70 percent outdoors. Metro Manila is currently under alert level 3 until Nov. 15, wherein business establishments can operate at 30-percent indoor capacity for fully vaccinated customers and half of their capacity outdoors.

David added that OCTA saw no reason not to ease restrictions as there was no COVID-19 variant currently posing a threat to the country.

Based on its analysis of data from the Department of Health (DOH), OCTA said Metro Manila’s Adar, which measures the number of new cases per 100,000 population of an area, had declined to 5.72 from 6.36 the previous week.

An Adar of more than 7 indicates high risk of infection in an area.

OCTA said the positivity rate of testing in Metro Manila had decreased to 5 percent while the reproduction number was 0.53.

It said all 17 local governments in Metro Manila had reproduction numbers less than 0.9, meaning all these areas are still on a downward trend in reported COVID-19 cases.

A reproduction number of 1 means that each infected person transmits the virus to one person. If the number is less than 1, such as the current numbers in Metro Manila, each existing infection will cause less than one new infection, which means that the spread of the virus is on the decline.

David noted that concerns of another surge might arise only when there was an increase in the reproduction number.

At present, there is a downtrend in Metro Manila based on the reproduction number, even if there were areas that recorded a positive one week growth rate, he said.

Since the reproduction number is the basis for determining whether the number of cases is going up or down, he said this meant the overall trend in Metro Manila was downward.

He pointed out that OCTA was not too concerned about the positive growth rate because this was sometimes due to delays in reporting data.

The vaccination rate in Metro Manila was also very high as some 96 percent of adults in the region had received at least a first dose, while more than 80 percent had been fully vaccinated, he noted.

“This means the chance of [another COVID-19 surge] is lower because many in Metro Manila are already protected. So we support the relaxation to alert level 2 so that our businesses could recover, but we should do so in a safe manner,” he said.

He reiterated OCTA’s earlier projection that daily cases in the country could go down to 2,000 by the end of November if current trends continued.

“We hope this comes true. If this happens, our holiday in December will continue to be a good one. But we remind the public that this is based on trends, and for the trends to continue, we must follow the minimum public health standards,” he said.

The alert levels in different parts of the country are determined by the DOH.

The system is meant to do away with large-scale lockdowns to allow more businesses to continue operating. It was first piloted in Metro Manila and recently expanded to several regions.

Active cases, or people still infected with the virus, also fell to 43,185, the lowest in nearly eight months or since March 9.

The death toll rose to 43,276 after the DOH reported 104 more deaths, 68 of whom were previously tagged as recovered.

The positivity rate, which measures how many were positive for the virus among those tested, was at 7.5 percent out of 41,712 people tested last Saturday.

The DOH data did not include those from eight laboratories that did not submit their results.