Acclaim for Greta Thunberg as pre-COP protesters rally in Glasgow 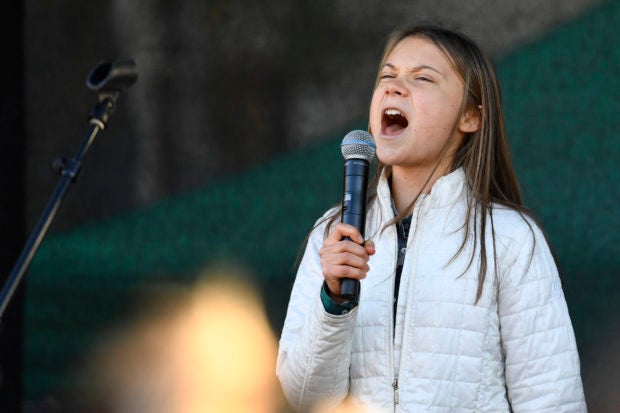 GLASGOW — Hundreds of activists rallied in Glasgow on Saturday to urge world leaders to act on climate change, in the biggest protests yet in the Scottish city ahead of the crucial COP26 summit.

Joining them was Swedish teen green icon Greta Thunberg, who arrived by train from London and was ushered from the platform and into the host city by a large police escort.

“Finally in Glasgow for the #COP26! And thank you for the very warm welcome,” tweeted the 18-year-old, who on Friday had attended a small London protest against global banks, accusing them of destabilizing the planet and putting many people’s lives at risk.

Activists from around the world have descended on Glasgow and organizers were expecting up to 100,000 people at a major demonstration on Friday.

Attendees had come from far and wide, including several other European countries, with some having walked long distances, to voice their frustrations at the UN conference starting on Sunday and running until November 12.

Earlier, demonstrators marched through the centre of Scotland’s biggest city, holding placards bearing slogans such as “actions not words” and “stop fossil fuels”.

They were led by members of the Extinction Rebellion direct action group, which has brought cities around the world to a standstill with its protest tactics and has vowed to do the same in Glasgow.

“We are waiting for more ambitious measures, for our political leaders to be aware of the urgency of the situation,” Dirk van Esbroeck, a Belgian pensioner, told AFP.

“Because our children, our grandchildren risk living in a much more complicated world, which is going to suffer serious climate disruptions.”

He and about 20 other members of a so-called “grandparents for the climate” group had travelled by train from Belgium to Edinburgh before walking the last 47 miles (75 kilometers) to Glasgow.

“There is still a long way to go between declarations and action,” added the 68-year-old, who has five children and 12 grandchildren.

More than 100 leaders, including US President Joe Biden, are set to attend the summit, which is considered pivotal in the fight against climate change.

“We just want to see concrete measures, we want to see support for the global south as well,” said Becky Stockes, a 31-year-old translator who had walked from Spain.

“It’s the last chance,” she added of the gathering.

Student Maciej Walczuk, 19, noted that despite 25 previous COP-style summits, “the climate situation is as bad as it has ever been”.

“We strive for a COP that is different… and (to) create solutions for people already affected,” he said.

Police say about 10,000 officers from across the UK will be deployed each day during the summit, the largest policing operation ever held in Scotland.