Britain steps up post-Brexit dispute with France over fishing 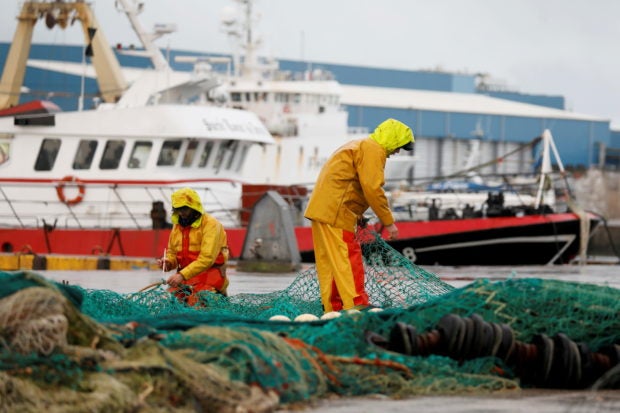 ROME — Britain stepped up a war of words with France on Saturday, with Prime Minister Boris Johnson refusing to rule out triggering trade dispute action next week in a fishing row and his Brexit minister sharply criticizing Paris’ actions.

Johnson, who is hosting the U.N. climate summit next week, again said he did not want the spat over fish derail this weekend’s meeting of the world’s 20 biggest economies, seen as a stepping stone to secure more commitments for COP26 in Glasgow.

But a volley of angry statements from Brexit minister David Frost underlined how seriously London was taking a letter sent by Paris calling on the European Union to demonstrate the damage of leaving the bloc. He described it as “very troubling”.

After an earlier British-hosted G7 meeting was overshadowed by a disagreement with the EU over post-Brexit problems with the movement of sausages and other goods to Northern Ireland, Johnson also made a move to defuse the row.

Asked if he would rule out triggering dispute resolution measures in the Trade and Cooperation Agreement (TCA) next week, Johnson said: “No of course not, I don’t rule that out.”

“But what I think everybody wants to see (is) cooperation between the European allies and Emmanuel Macron and I share a common perspective which is that climate change is a disaster for humanity.”

Relations with France have become increasingly strained since Britain voted to leave the EU in 2016, with London’s security pact with the United States and Australia doing little to build trust with Paris. French President Macron has questioned Britain’s “credibility”.

Fishing, which dogged Brexit talks for years, while not economically crucial to either country, holds huge political importance to both, and the row, if not resolved, could trigger the beginning of dispute measures in the Brexit trade deal.

Any such measures would likely involve convening an arbitration panel and could result in a demand for compensation or suspension of obligations.

The letter sent by French Prime Minister Jean Castex to the EU calling on the bloc to demonstrate there was “more damage to leaving the EU than to remaining there” has also soured ties.

Frost said he hoped “this opinion is not held more widely across the EU”, calling its expression in a letter “clearly very troubling and very problematic”.

Johnson also expressed his concerns “about the rhetoric from the French government” at a meeting with EU Commission President Ursula von der Leyen. She said Brussels was “intensively engaging for finding solutions”.

In Rome, Johnson and Macron exchanged a mock-combative fist bump but did not appear to speak to one another as the leaders took a “family photo”. They are due to see each other for a brief meeting on Sunday.

“We have been seeking to work with the French government to issue more fishing licenses, we stand ready to continue that work,” Johnson’s spokesman said.

With an election in April in which Macron is expected to seek a new term, some British officials say he is seeking to look tough to appeal to the electorate. Some European diplomats see Johnson’s government as likewise taking a firm stance to please Brexit supporters.

The issue escalated this week when a British scallop dredger was escorted to a French port after French officials said it did not have the correct documentation. Paris has said it could begin to impose targeted measures from Tuesday, including heightening some checks, if the dispute is not resolved.

“The president is in favor of calming things down, but at the same time he can’t pretend the British are not reneging on the commitments they’ve made,” the source said.