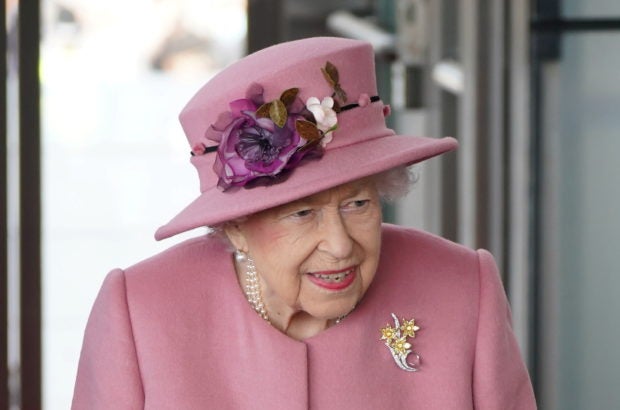 LONDON — Britain’s Queen Elizabeth II has been advised by doctors to rest for at least the next two weeks, with the 95-year-old monarch avoiding official visits and only undertaking light duties during this time, Buckingham Palace said Friday.

However, the world’s oldest and longest-reigning monarch is determined to appear at the annual Remembrance Sunday service that commemorates the nation’s war dead in central London on November 14, the palace said.

Elizabeth, who is the queen of 15 other realms including Australia, Canada, and New Zealand, has been resting at her Windsor Castle since she stayed overnight in hospital last week after undergoing “preliminary investigations” for an unspecified ailment that is not related to COVID-19.

The monarch had already pulled out of addressing world leaders in person next week at the COP26 climate change summit in Glasgow.

And she has endured a difficult two years. In April her husband of more than seven decades, Prince Philip, died aged 99, while in 2020 her grandson Harry and his wife Meghan stepped back from royal duties and moved to the United States.

Her second son Prince Andrew has also quit royal duties over his links to U.S. financier Jeffrey Epstein, a registered sex offender who killed himself in a Manhattan jail in 2019.

Following the latest advice, Elizabeth will no longer attend a major event on November 13 at the Royal Albert Hall hosted by a British military charity. But the queen had a “firm intention” to be present at the main national service of remembrance for veterans on Sunday, November 14, the palace said.

A palace source said the queen remained in good spirits and had recorded a video address for the COP26 delegates on Friday. Further rest was a “sensible precaution,” the source added.

However, the news is likely to raise concerns about the health of the queen, who is due to celebrate 70 years on the throne next year. The Daily Telegraph described the advice for two more weeks of rest as the most significant absence of the queen’s long reign.

Aides have not given any details as to what prompted the medical attention last week, which followed the cancellation of a visit to Northern Ireland.

Since then the queen appeared in a cheerful mood in video footage released by the palace on Thursday, when she took part in a ceremony awarding a medal for poetry.

She has also been shown smiling and greeting foreign ambassadors via video link.

Prior to this period, the queen has been known for her robust health and still carries out many public duties.

The evening before she had to go into hospital, she hosted a drinks reception at Windsor Castle for billionaire business leaders, including Bill Gates, who were attending a green investment conference ahead of COP26.