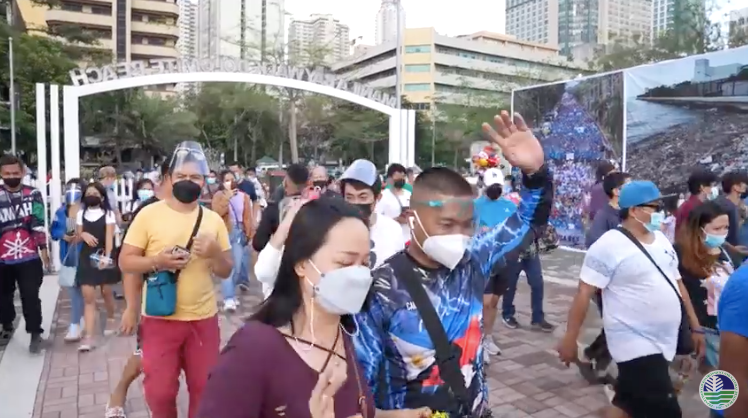 Multitude of people have been visiting the Manila Bay Dolomite Beach since its reopening to the public last week following the downgrading of the quarantine restrictions in NCR to Alert Level 3. Screengrab from YouTube / DENR

MANILA, Philippines — Despite earlier calls to further relax quarantine restrictions, the government’s pandemic task force decided to retain the alert level 3 classification for Metro Manila until Nov. 14 for fear of a possible surge in COVID-19 infections once more business establishments are allowed to reopen.

Nine areas in Metro Manila are also being “closely monitored” by the Department of Health (DOH) after registering a positive seven-day growth rate as of Thursday, indicating that COVID-19 cases in these places increased in the past week, Health Undersecretary Maria Rosario Vergeire said on Friday.

However, the DOH did not identify the areas.

Vergeire added that while healthcare utilization rate had recently gone down to less than 50 percent in Metro Manila, the region was still at moderate risk with an average daily attack rate (Adar) of 7.4 per 100,000 population as of Oct. 28.

Adar is the number of individuals infected for every 100,000 people. An area is classified as low risk when the average number of cases is less than 1 per 100,000; moderate risk when it is between 1 and 7, and high risk when it is more than 7. New COVID-19 cases also climbed for a second consecutive day to 4,043 on Friday, raising the total tally to 2,779,943. The positivity rate remained at 8.6 percent after 4,478 of the 52,064 tested individuals yielded positive results.

Presidential spokesperson Harry Roque said at a press briefing on Friday that people would be able to move more freely next month with the increase in passenger capacity in public transportation.

“With increased mobility, it’s possible that COVID cases will rise. We are lowering the alert level system gradually so that there will not be a spike in cases,” Roque said.

Vergeire reiterated the need to remain vigilant amid the threat of emerging COVID-19 variants, such as the Delta subvariant AY.4.2, which was first detected in Britain.

“No one can ever be prepared for any type of variant … but based on experience, I think we are now more capable [when] the next variant comes in. The capabilities of our country have improved since the start of the pandemic,” she told reporters at a media forum.

The World Health Organization earlier said that it was monitoring the Delta subvariant, but the UK Health Security Agency designated it as a “variant under investigation” on Oct. 21. Alert level expanded

The government also approved the expansion of the alert level system to three more regions.

From Nov. 1 to Nov. 14, Central Luzon, Western Visayas, and Northern Mindanao will be under alert levels instead of community quarantine classifications, which will allow these areas to do away with large-scale lockdowns. Baguio City will also have an alert level as an area for special monitoring.

The alert level system was piloted in Metro Manila this October and later in the Calabarzon, Central Visayas, and the Davao regions.

The areas not under the alert level system will have quarantine classifications.

Mountain Province, Catanduanes, and Zamboanga City will be under modified enhanced community quarantine from Nov. 1 to Nov. 15.

On the other hand, Abra, Cagayan, Isabela, City of Santiago, Nueva Vizcaya, and Quirino will be under general community quarantine with heightened restrictions.

The pandemic task force also allowed the conduct of indoor certification or qualifying examinations of testing centers in areas under the alert level system, except when alert level 5 is imposed.

But the task force said all workers and employees of the testing centers, as well as the examinees, must be fully vaccinated against COVID-19.

They must also comply with the prescribed venue capacity and observe minimum public health standards.