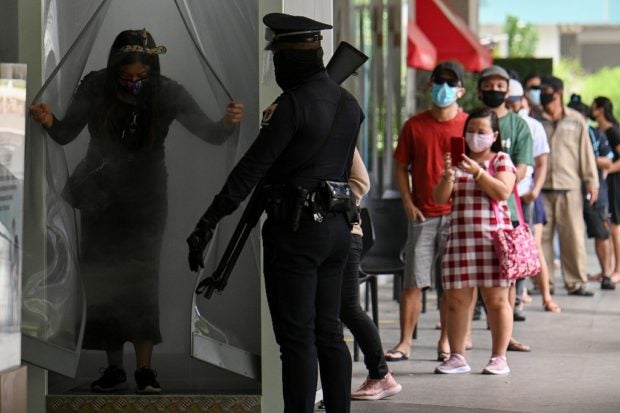 MANILA, Philippines — The Philippine National Police (PNP) has assured the public that it would continue its vigilance in the enforcement of health protocols even if the quarantine restriction in the National Capital Region (NCR) were to be lowered to Alert Level 2.

PNP chief Gen. Guillermo Eleazar said the move is part of the preparations of Metro Manila mayors and the Department of the Interior and Local Government (DILG) for a possible downgrading of health protocols in November.

Eleazar stressed that the PNP is ready to implement whatever health protocol is needed, adding that minimum public health standards would still be observed.

(Whatever the Alert Level is being implemented, the PNP is always ready to enforce the rules and regulations to ensure the safety of Filipinos.)

A constant decline in COVID-19 cases in Metro Manila has led to suggestions that more restrictions could be eased to boost the economy.

Currently, the Inter-Agency Task Force for the Management of Emerging Infectious Diseases (IATF) has not yet issued a new set of quarantine restrictions, while the current quarantine status over Metro Manila will remain in place until October 31st.

READ: DILG, NCR mayors ready if alert level would be downgraded in November

But despite the possibility of a less-restrictive quarantine status, Eleazar stressed that it is still important to follow health protocols, especially since the COVID-19 pandemic does not identify what restrictions are in place when it spreads from one person to another.

(But the most important thing is for our fellow Filipinos to join us in the observance of health protocols by following the minimum public health safety protocols and by remaining vigilant about reminding people violating the protocols, and the government to implement the rules.)

(The coronavirus does not care about the alert levels, that’s why people who may fall victim to the pandemic should just adjust to it, by following the rules properly for our own safety, while we in the PNP would always help to remind the public about it.)

Despite the optimistic outlook, several government officials have also warned that in some areas, the decrease in COVID-19 cases has slowed down.  Also, there is still the threat of a Delta subvariant in some countries.

Eleazar also promised that they will deploy a sufficient number of police officers to avoid crowding in public spaces and areas of leisure.

“We will not only be enforcing health protocols but we will also enhance crime prevention efforts,” he added.

The PNP chief’s statements came after he called for greater cooperation between the Manila Police District (MPD), the local government, and the Department of Environment and Natural Resources (DENR) in controlling the crowds at Manila Bay’s dolomite beach.

Eleazar said this as viral videos and photos on social media showed children out of their homes for leisurely trips, and some people disregarding health protocols.

On Monday also, Presidential spokesperson Harry Roque reminded the public that disregarding quarantine rules by crowding the dolomite beach may do more harm than good, as it may lead to a super spreader event if people become complacent.