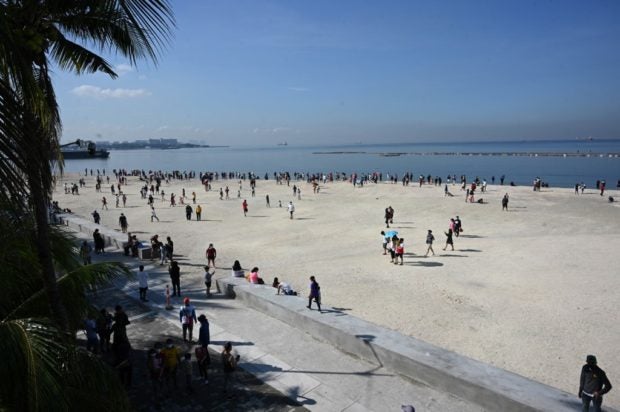 A general view of people trooping to the Manila Baywalk dolomite beach along Roxas boulevard in Manila on October 17, 2021, a day after authorities eased its quarantine restrictions in the nation’s capital. (Photo by Ted ALJIBE / AFP)

Malaya said that the Department of Environment and Natural Resources (DENR) is considering  closing the area for “a few more weeks” after “Undas.”

“It is possible that they will keep the dolomite beach closed until such a time they are complete with the expansion because they will actually expand the beach further to the other areas which have not been rehabilitated,” Malaya said in an interview on ABC-CBN News Channel.

“I think what they are considering is, while construction is ongoing, they would rather close the completed portions at this time,” he added.

The dolomite beach will be closed from the public starting October 29 until November 3.

The soft opening of the area drew thousands of local tourists, which some experts say may result in the spread of COVID-19.