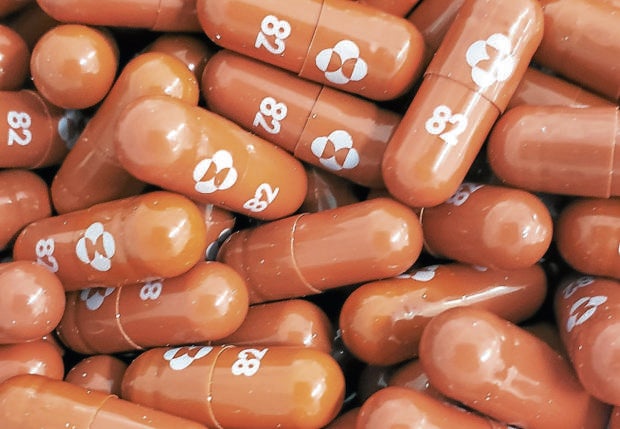 MANILA, Philippines — About 300,000 COVID-19 patients in the country who have exhibited mild symptoms will be able to avail themselves of molnupiravir, the first oral antiviral pill prescribed for COVID-19, by next month.

The breakthrough medication will be available in hospitals and medical associations that were granted a compassionate special permit (CSP) early this month by the Food and Drug Administration (FDA), officials of pharmaceutical company MedEthix, the local importer of molnupiravir, said in a press briefing.

As of Monday, there were 30 hospitals nationwide that have been given CSPs to use the pill. The list of hospitals would not be disclosed to the public for the patients’ privacy, FDA Director General Eric Domingo told the Inquirer. Only COVID-19 patients with a doctor’s prescription can avail of the first shipment of the antiviral pills arriving next month, said Monaliza Salian, president and CEO of MedEthix, stressing that her company is bound by the limitations set in the CSP.

An emergency use authorization (EUA) for molnupiravir was recently filed with the local FDA, which has yet to act on it, Salian said.

A CSP is a special permit granted to physicians and hospitals for the use of an unregistered drug, while an EUA is issued to unregistered drugs and vaccines in a public health emergency, according to the FDA.

The market price of molnupiravir in the Philippines has yet to be determined, but is “definitely not as expensive” as the ones sold in the United States, said Meneleo Hernandez Jr. of Jackpharma Inc., the local distributor of the antiviral pill to the medical institutions.

“Right now, there’s no initiative [yet] from the DOH (Department of Health) on the actual pricing or regulation for molnupiravir,” Hernandez said. A five-day course of molnupiravir treatment reportedly costs about $700 in the United States.

Molnupiravir will be supplied by Aurobindo Pharma, one of eight Indian manufacturers that signed a voluntary licensing agreement with US drugmaker Merck & Co. Inc., the developer of the antiviral pill.

The Indian drugmakers are expected to produce generic versions at a much lower cost to ensure accessibility in poorer nations.

Molnupiravir was found to reduce the risk of hospitalization by 50 percent for COVID-19 patients with mild symptoms, based on the results of Phase 3 of the clinical trial conducted by Aurobindo, according to Hernandez.

Results also showed that 81 percent of those who took the pills tested negative in RT-PCR tests on day five of the 14-day clinical trial, compared to 17 percent who were treated only with regular medications for COVID-19 symptoms such as cough and colds.

There was also notable clinical improvement as symptoms disappeared on the fifth day for 29 percent of those who took the pills, as opposed to the 5 percent who did not receive molnupiravir.

Adverse effects were “mild to moderate in nature,” Hernandez said, without going into specifics. He added that there were no fatalities during the clinical trial.

The recommended dosage is eight 200mg capsules per day for five days, or as prescribed by a doctor.

The antiviral medication introduces “copying errors” into the genetic code of the virus during RNA (ribonucleic acid) replication, making the virus harmless. This prevents the deadly growth and spread of COVID-19 in the body.

Indonesia, which was considered Asia’s COVID-19 epicenter in July, is “finalizing” a deal with Merck for the supply of the experimental antiviral pills.

Merck, which is developing molnupiravir with partner Ridgeback Biotherapeutics, asked for an emergency use clearance from the United States earlier this month. The drugmaker has a contract with the US government to supply 1.7 million courses of the drug.

It has signed supply deals for the drug with Indonesia’s neighbors Malaysia and Singapore, as well as Britain.

The European Union’s drug regulator has initiated a real-time review of the pill.

Molnupiravir, if approved by regulators, would be the first COVID-19 drug administered orally and also the first treatment for mildly ailing patients, whereas existing drugs are mostly used to treat the critically ill.