STUDENT VOICE Members of student and youth organizations in Baguio City march on Session Road in this 2018 photo to air their position on issues, such as education and human rights. The pandemic has limited gatherings but young activists have continued protesting government actions that limit academic freedom, like the purging of “subversive” materials from school libraries. —EVESPIRITU

BAGUIO CITY, Benguet, Philippines — The memorandum of the Commission on Higher Education (CHEd) regional office in the Cordillera encouraging universities and colleges to remove “subversive” learning materials from their libraries and information network is a “brazen attack on academic freedom” in a form of state policy, students and rights groups said this week.

On Oct. 21, Demetrio Anduyan Jr., CHEd Cordillera director, issued Regional Memorandum No. 113 calling on higher education institutions to take part in the “region-wide removal of subversive materials both in libraries and online platforms.”

According to Anduyan, CHEd supports the “whole-of-nation” approach of the Duterte administration that created the National Task Force to End Local Communist Armed Conflict (NTF-Elcac).

In a statement on Tuesday, UP Rises Against Tyranny and Dictatorship (UP Rise), a student organization at the University of the Philippines Baguio, assailed the memorandum, which it described as a “Nazi-like attempt to strip off … academic freedom.”

The memorandum described these antigovernment materials as “literatures, references, publications, resources and items that contain pervasive ideologies of the communist-terrorist groups.”

According to UP Rise, the memorandum “takes away [our] freedom to be critical and freely participate in the democratic space in our society.”

“Books, resources and other reading materials are not the root cause as to why there is armed conflict in the Philippines,” it said. 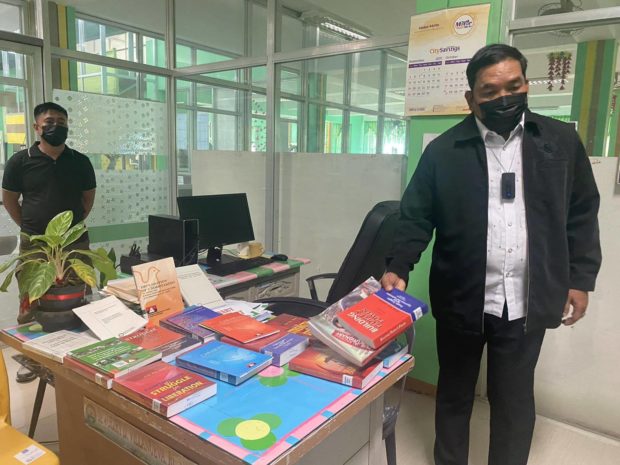 The memorandum urged school officials to surrender these materials to the National Intelligence Coordinating Agency and to submit a record of all of the purged items.

“What will the CHEd and NTF-Elcac do next—name books and websites to be banned and authors to be blacklisted for ‘subversive’ and ‘communist-terrorist ideologies?’ Will they raid the libraries of schools who refuse to join their campaign?” Cristina Palabay, Karapatan secretary general, said in a separate statement on Wednesday.

Palabay said school libraries should be “bulwarks” of unrestricted access to knowledge.

“We strongly call on schools, universities, and libraries to denounce and resist these attacks on academic freedom and to safeguard free academic discourse in their halls,” she said.

In an earlier statement, Palabay said: “The NTF-Elcac is gearing for an insidious campaign of censorship through the purging of ‘subversive’ materials from the libraries of schools and universities—recalling the horrors of the Marcos dictatorship’s raids on libraries and even the book burning of the Nazis.”

According to KSU officials, they rid the library of antigovernment books and reference materials from the National Democratic Front of the Philippines (NDFP) after an inspection of a group of policemen and soldiers of the KSU Bulanao campus on Sept. 1

Evangeline Cabello, chief librarian of KSU, said the decision was meant to “protect [the students] from being recruited to join communist groups.”

The ISU library removed at least 23 NDFP handbooks and books and documents authored by Jose Maria Sison, founding chair of the Communist Party of the Philippines now in exile in the Netherlands, to support the government’s anti-insurgency program.

ISU president Ricmar Aquino had directed the university’s main campus in Echague town and 10 other campuses in Isabela to remove the NDFP handbooks from their libraries.