China condemns posters of Tibetan flag outside its embassy in Denmark 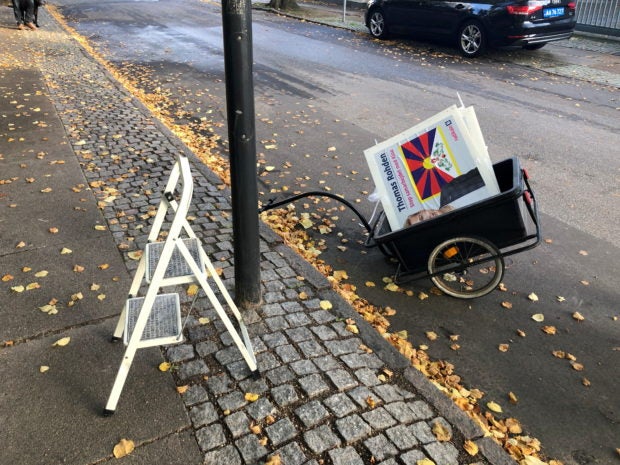 FILE PHOTO: A trolley of a political candidate in upcoming local elections Thomas Rohden loaded with posters displaying him next to a Tibetan flag parks outside the Chinese embassy near Copenhagen, Denmark October 26, 2021. REUTERS/Nikolaj Skydsgaard

COPENHAGEN — China condemned on Wednesday the placing of election posters depicting the Tibetan flag outside its embassy in Denmark as a deliberate attempt to interfere in China’s internal affairs.

Ten posters of a candidate in a local election standing next to the Tibetan flag were removed shortly after he put them up outside the Chinese mission in a suburb of the capital Copenhagen.

China has ruled the remote western region of Tibet since 1951 when its army marched in and took control in what it called a “peaceful liberation”. Beijing brands Tibet’s current Dalai Lama, exiled in neighboring India, as a dangerous separatist.

“We express our strong indignation at this deliberate provocation,” the embassy said in a statement on its website “on Anti-China Posters in Front of the Embassy”.

“We firmly oppose any attempt to interfere in China’s internal affairs and to undermine its sovereignty and territorial integrity under the pretext of election campaign or the so-called ‘freedom of speech’.”

It added: “Tibet is an inalienable part of China, and any attempt to separate it from China is bound to fail.”

Thomas Rohden, the local election candidate who put up the posters, said on Tuesday he assumed they had been removed by embassy employees. The embassy statement did not address those allegations.

China has not been an issue in the local elections but Rohden is known critic of Beijing. Rohden hung new posters in front of the embassy on Tuesday.

Police said they were considering an investigation.

Danish Foreign Minister Jeppe Kofod said in a statement he found the removal of the election posters “worrying” and that he would await a decision by the police before taking further action in the case.

Rohden said the posters were meant as a protest against a 2012 partnership accord between Danish health authorities and the eastern Chinese province of Jiangsu. Public records show the deal is no longer active but has yet to be formally terminated.