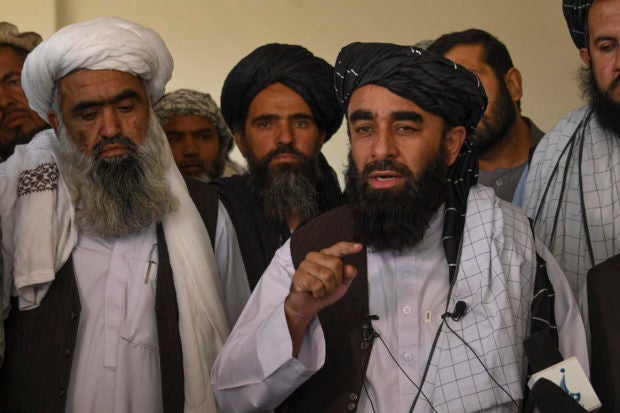 In this picture taken on October 24, 2021 Zabihullah Mujahid (2L), Chief spokesman for the Taliban speaks during a launch of a program by Afghanistan’s Taliban government to tackle hunger, offering thousands of people wheat in exchange for labor, in Dasht-e-Padula of southern Kabul. AFP

ISLAMABAD — Global powers and aid groups that have loudly demanded an inclusive Afghanistan under the Taliban are now facing criticism for sending all-male delegations to Kabul to meet the hardline Islamists.

Since seizing power in August, the Taliban have excluded women from their new caretaker government and put restrictions on work and education, drawing condemnation from the outside world.

But female representation has been little better among some governments and aid groups in their meetings in the capital with Afghanistan’s new rulers, who are seeking international recognition.

“Senior women in your teams should be leading your interactions with the Taliban… Don’t exclude women,” said Shaharzad Akbar, the exiled head of the Afghanistan Independent Human Rights Commission.

In a tweet addressing “governments and aid agencies”, she called on them to “NOT NORMALIZE Taliban’s erasure of women”.

Heather Barr from Human Rights Watch created a list, under the hashtag “sausageparty”, of pictures posted by the Taliban of their meetings with delegations in Kabul.

“No one should let the Taliban think that this kind of men-only world that they are creating… is normal.”

The Taliban have posted dozens of photos on social media of closed-door meetings with groups of foreign representatives, showing not a single woman.

Among the many meetings highlighted was one earlier this month between British envoy Simon Gass and the Taliban’s interim deputy prime ministers Abdul Ghani Baradar and Abdul Salam Hanafi, seated on a sofa in a lavish room.

An official told AFP it was a coincidence that the special envoy and head of mission were both men.

Pakistan, which has advised the Taliban on how to win international backing, also posted pictures and video of an all-male group accompanying the foreign minister and intelligence chief to Kabul.

Fawzia Koofi, one of the negotiators in failed peace talks between the then Afghan government and the Taliban last year in Doha, voiced her anger.

“As world leaders, when they talk about women’s rights, they also need to act. They need to show that they believe in it, that it is not just a political statement,” she told AFP.

Even more concerning, Barr said, were the numerous pictures of meetings between the Taliban and humanitarian organizations that seemed to follow the same pattern.

When contacted by AFP, the organizations on her list highlighted their dedication to women’s rights and said they strived to include women in meetings with the Taliban.

But several acknowledged holding at least one meeting with the hardline Islamists that included no women.

The International Committee of the Red Cross, the UN children’s agency, and Doctors Without Borders explained that on the photographed occasion, they had only sent small delegations of top leaders, who happened to be men.

The International Federation of Red Cross and Red Crescent Societies meanwhile said a last-minute scheduling change had meant a woman staff member due to take part had been unable to attend, turning one meeting into an all-male event.

The lack of women in such high-level positions shows that while Afghanistan might be an extreme example, it is not the only place where women are being denied an equal seat at the table.

“Raising those concerns about women’s rights in a room full of all men just seems very strange,” Barr added.

The United Nations has since announced its first-ever all-woman mission to Afghanistan, to discuss girls’ education with the Taliban.

While never including women in their teams, the group’s leaders have met with a number of women, including during the Doha negotiations with the then Afghan government.

Koofi, who has survived two assassination attempts, had first hesitated to join the talks with the militants, who jailed her husband and threatened to stone her for wearing nail polish during their 1990s rule.

But sitting face to face with them had made her feel “powerful”.

“For me, it was important that I make myself visible and my message clear to them,” she told AFP in 2019.

Now those with the power to ensure women have a seat at the table are often failing to do so, she said.

“Everyone is playing politics.”