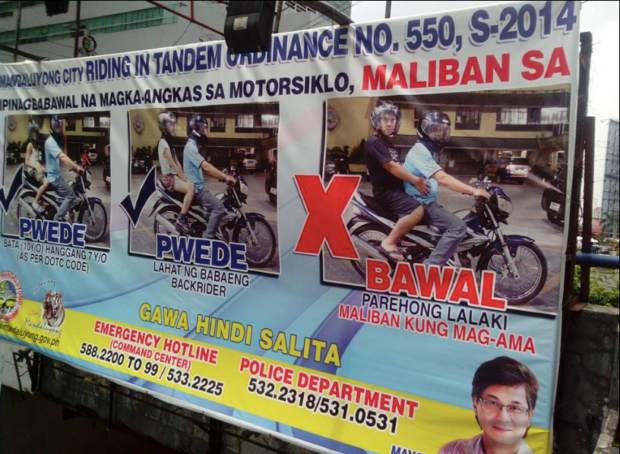 A tarpaulin in Mandaluyong gave a fair warning pursuant to its ordinance against “riding-in-tandem”. Image from Facebook / Daniel De Guerto Reyes

MANILA, Philippines — A lawyer who was fined for being a back rider of motorcycle-hailing app Angkas has won his case at the Court of Appeals after it declared as unconstitutional the “riding-in-tandem” ordinance of the city of Mandaluyong.

The appellate court, in a decision penned by Associate Justice Raymond Reynold Lauigan dated September 28, prohibited the Mandaluyong city government from implementing City Ordinance No. 550 for being oppressive, arbitrary, discriminatory, and going “beyond what is reasonably necessary for the accomplishment of the purpose” of the city.

The assailed ordinance, dubbed the Motorcycle Riding-in-Tandem Ordinance, prohibited males from back-riding on a motorcycle, except if the driver is their first-degree family member or if they are seven to ten years old.

“Respondent-appellee City of Mandaluyong, and all persons or entities acting on its behalf or under its authority, are prohibited from enforcing and implementing Mandaluyong City Ordinance No. 550, S-2014, 595, S-2015 and 694, S-2018,” it further said.

Based on court records, petitioner lawyer Dino De Leon was apprehended on March 7, 2019 while commuting using an Angkas service on the basis of the city ordinance. He paid the fine under protest and sent a letter to the Traffic Management Department of the city.

A criminal complaint was subsequently filed against him before the Office of the City Prosecutor of Mandaluyong.

At that same time, De Leon filed a petition that assailed the constitutionality of the ordinance, with a prayer that a restraining order be issued against its implementation.

In July last year, the Mandaluyong Regional Trial Court dismissed his petition for lack of merit. De Leon filed a motion for reconsideration, but this was also dismissed in October last year, prompting him to take his case to the Court of Appeals.

In handing down its decision, the  appellate court’s Fifth Division reversed the July 1, 2020 ruling issued by Mandaluyong court.

The CA, in its 27-page ruling, said there is no legal distinction between a male and female back rider when it comes to addressing or preventing crimes committed by “riding in tandem” suspects.

“In the present case, We find that imposing an encompassing prohibition against male back riders is an oppressive measure that goes beyond what is reasonably necessary for the accomplishment of the purpose that respondent-appellee City of Mandaluyong aspires which is to suppress lawlessness, disorder, and violence. The prohibition is oppressive because it arbitrarily limits the movement and mode of transportation of male back riders even though there is no direct link or available statistical data presented before the trial court to show that motorcycle riding criminals are males,” the appeals court added.

The appellate court likewise said the city government failed to provide evidence that it has tried other means to suppress crimes perpetrated by riding in tandem suspects.

“Resort to other less restrictive measures which would ensure that motorcycle user, their riders of whatever gender they may be, as well as the motorcycle itself is easily identifiable, and visibly seen and monitored by the police authorities were not shown to have been resorted to by respondent-appellee,” it said.

Further, it said the city government also failed to prove that the enactment and implementation of the subject ordinances are “fair, not discriminatory and not unreasonable.”

“A more extensive review by this Court shows that the subject ordinances are unconstitutional because they also violate the Rule on Equal Protection,” the CA said.

Concurring with the decision are Associate Justices Pablito Perez and Ramon Bato.

In a Facebook post, De Leon said the decision showed the need for the public to fight for their rights, especially when confronted with similar “oppressive measures.”

“It was a long arduous task of writing pleadings and attending hearings, especially since I was up against the City’s entire Legal Department. Nevertheless, this shows that ordinary citizens can push back against injustices and oppressive measures,” he said.

De Leon also called on the Mandaluyong City government to return the millions of pesos they have collected as penalties for those who violated the ordinance.

“Last time I checked, the City of Mandaluyong has illegally collected around 200 million pesos from their apprehensions, and most of these exactions are from the poor who cannot afford other posh means of transportation. Time for them to give the people’s money back,” he added.