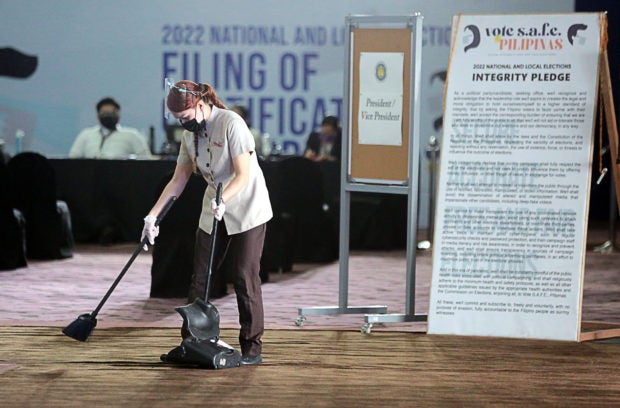 CLEANING UP THEIR ACT A worker sweeps the floor of the venue set up by the Comelec at Sofitel hotel in Pasay City for filing certificates of candidacy for the May 2022 polls, where politicians
of every stripe have strode in and out since Oct. 1, with more expected till Friday. At right is the “integrity pledge” that is always worth remembering in times like these. — GRIG C. MONTEGRANDE

MANILA, Philippines — The Commission on Elections (Comelec) on Wednesday proposed to senators that an electoral aspirant declared as a nuisance candidate be disqualified from running for two successive polls.

During the hearing of the Senate electoral reforms committee, Comelec expressed support for a bill setting forth the procedures for declaring aspiring politicians as nuisance candidates.

“We support the imposition of the fine of P100,000, and we also propose that those who were declared as nuisance candidates be disqualified from running for two successive elections,” said Maria Norina Tangaro-Casingal, director of the Comelec’s law department.

“They can no longer substitute also if they have been declared as a nuisance candidate… that’s our proposal,” she added.

The committee was tackling House Bill No. 9557 which seeks to amend the Omnibus Election Code if signed into law.

The bill requires a penalty worth P100,000 for anyone who attempts to file a certificate of candidacy “to put the election process in mockery or disrepute or to cause confusion among the voters by the similarity of the names of the registered candidates.”

Similarly, people named in the verified petition who were found to have conspired with that person to file his or her certificate of candidacy would also face a fine of P100,000.

“That’s a good idea,” said Marcos, who then inquired data from Comelec on the number of candidates it had declared as nuisance in previous elections.

In 2019, the Comelec declared 84 senatorial aspirants as nuisance, according to lawyer Genesis Gatdula of the Office of the Clerk of the Commission.

Meanwhile, in 2016, 251 candidates for president, vice president and senators were declared nuisance.

Senator Francis Tolentino asked the Comelec to provide to the Senate committee the number of local candidates who were considered nuisance.