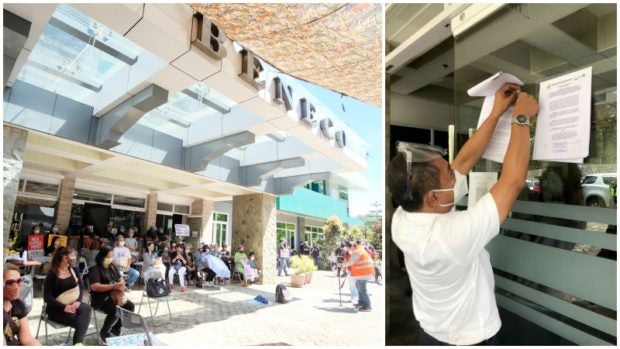 LEADERSHIP SQUABBLE In this photo taken on Oct. 20, employees of the Benguet Electric Cooperative (Beneco) retake their offices in Baguio City after the building was taken over by the National Electrification Administration through the assistance of policemen. Below, NEA lawyer Omar Mayo, in a Sept. 28 photo, posts the suspension order of Beneco officials who defied the NEA’s decision to appoint a new general manager. —PHOTOS BY NEIL CLARK ONGCHANGCO AND VINCENT CABREZA

In an 8-3 vote with one abstention, the council took Mayo to task for supposedly escalating a legal standoff between Beneco and the National Electrification Administration (NEA) that has been denounced by Baguio and Benguet residents and by other rural electric cooperatives.

Mayo, a NEA legal officer, was designated by the government’s electric cooperatives regulator in September as Beneco’s project supervisor to “address the ongoing conflict and standoff on the Beneco leadership and organizational management issues and concerns.”

Seven members of the Beneco board of directors and its employees earlier rejected the NEA’s appointment of a former Malacañang official, who is the subject of cases filed in different courts, including the Court of Appeals.

For almost four hours on Monday, the councilors questioned Mayo about the early morning break-in at the Beneco headquarters on Oct. 18, which involved policemen deputized by the NEA.

Councilor Betty Lourdes Tabanda, a lawyer, said the public was angry because the NEA used armed policemen to seize a utility “while everyone was sleeping.”

The council said the resolution declaring Mayo persona non grata expressed the city’s sentiment against the NEA, but this would not bar Mayo from exercising his right to travel to and from the city.

Some did not vote for the resolution, arguing that Mayo was simply performing a government function.

It took 66 members of the Baguio police and a 24-member crowd control team from the Cordillera police’s Regional Mobile Force Battalion at Camp Dangwa in Benguet to help Mayo take control of Beneco’s headquarters on South Drive here.

“To avoid a violent confrontation [with employees], we opted to do it early [in the morning] so we will just allow employees to enter and prevent seven people from entering,” Lonogan said during the council inquiry.

But Lonogan did not address the revelation made last week by Mayor Benjamin Magalong that the police suspected that the employees could be infiltrated by “extremists.” The protests against the NEA were legitimate, the mayor said during a briefing on Oct. 20.

According to Mayo, he was ordered to prevent current general manager Melchor Licoben, Beneco board president Esteban Somngi and six of 10 directors from entering and performing their duties at Beneco’s offices because they had defied the NEA.

The NEA earlier suspended the Beneco officials due to an insubordination complaint filed on Sept. 6 by lawyer Ana Maria Paz Rafael Banaag, who was endorsed by the regulator as Beneco’s general manager.

A former assistant secretary at the Presidential Communications Operations Office, Banaag was rejected in a 6-4 vote by the Beneco board, which stood by its 2020 appointment of Licoben.

Since the suspended Beneco officials continued to report for work, Mayo said the NEA resolved the impasse through the exercise of its powers provided by Republic Act No. 10531 (NEA Reform Act of 2013) deputizing the Philippine National Police.

Lonogan said the police did not break into the building, noting that people who accompanied Mayo simply pushed aside galvanized iron sheets that covered a broken glass door.

The glass door was shattered on Sept. 28 when Mayo first tried to take over the utility. He was turned away by employees because the building had been locked down following a COVID-19 outbreak.

The leadership dispute has shifted to the utility’s finances after Beneco threatened legal action against a government bank.

But Mayo informed the council that Banaag’s team had access to funds.

He confirmed that Banaag’s group collected payments from consumers on Oct. 18 and Oct. 19 using tellers it hired to run Beneco’s collections centers.

Mayo said the payments had been accounted for up “to the last centavo” and had been deposited in the group’s own Beneco account at an undisclosed government bank.