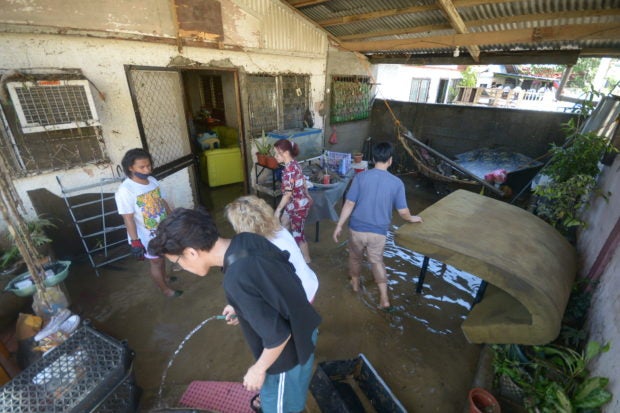 CLEANUP Family members on Tuesday clean up their belongings at La Verna Hills Subdivision in Davao City’s Buhangin district, where several houses were submerged by floodwaters after a heavy downpour on Monday night. —BING GONZALES

DAVAO CITY, Davao del Sur, Philippines — Residents of La Verna Hills Subdivision in Buhangin district here woke up Tuesday surveying the damage of Monday night’s floods that, in some areas, reached up to the rooftops.

Jam Gaus, another resident, said they did not expect the floods to be that high, although their village had always been prone to flooding for years.

Gaus blamed the sudden rise of water in a nearby unfinished drainage project following heavy rain. “They started working on it for months now but they never finished it,” he said. “The debris from the torn canal walls must have trapped the water and worsened the flooding.”

As of 3 p.m. on Tuesday, Gaus said they had not received any aid from the city government although some packs of relief goods and rice already reached some villagers.

Saragoza said floodwaters destroyed most of their household appliances. He estimated the damage to reach at least P300,000.Nilo Cabiles, village chief of Cabantian, said about 250 households in La Verna Hills were affected by the flooding.

They are asking for medicine or antibiotics for leptospirosis and other diseases that could be borne by dirty floodwater. They also need clothes and food and other assistance that may be coursed through district leaders or the parish church in the area.

Cabiles said members of five families were also rescued in Soraya Subdivision although residents there immediately went home after the water subsided on Monday night.

Aside from La Verna Hills, the water inundated most of the city’s downtown streets, stranding people in their vehicles. Cabs had to go the roundabout way to reach their destinations.

The Davao City Disaster Risk Reduction and Management Office (DRRMO) said no casualty was reported so far from Monday’s flooding.

Hundreds, however, were evacuated as rivers and creeks overflowed to nearby residential areas, Alfredo Baloran, head of the Davao DRRMO said.

Baloran’s office had issued early warning to residents in flood-prone areas, urging them to evacuate.