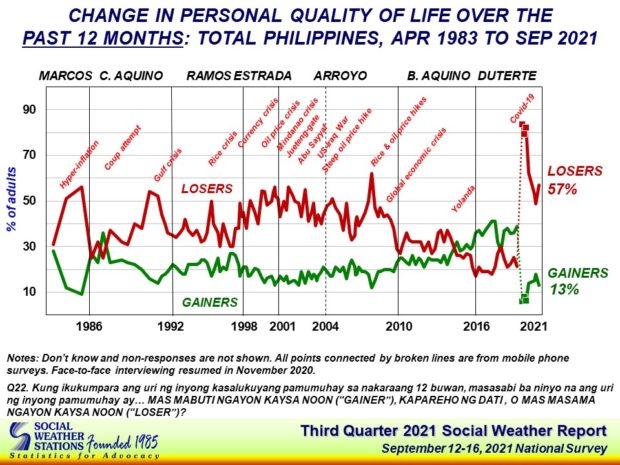 MANILA, Philippines — More than half or 57 percent of Filipinos said that their life got worse in the past 12 months, according to a survey released by the Social Weather Stations (SWS) on Tuesday.

The non-commissioned survey was conducted from September 12 to 16, 2021, using face-to-face interviews with 1,200 respondents aged 18 years old and above, nationwide — 300 each in Metro Manila, Balance Luzon, the Visayas and Mindanao.

Meanwhile, net gainer scores worsened in all areas. It was lowest in Metro Manila at -51, which the SWS tagged as “catastrophic.” This is 21 points below the -30 recorded in the last survey.

However, the net gainer score eased from “very low” to “low” among college graduates, which went up by 4 points from -30 to -26.

The survey had sampling error margins of ±3 percent for national percentages and ±6 percent for Metro Manila, Balance Luzon, the Visayas, and Mindanao, said the SWS.

Quality of life worse for 49% of Pinoys – SWS survey