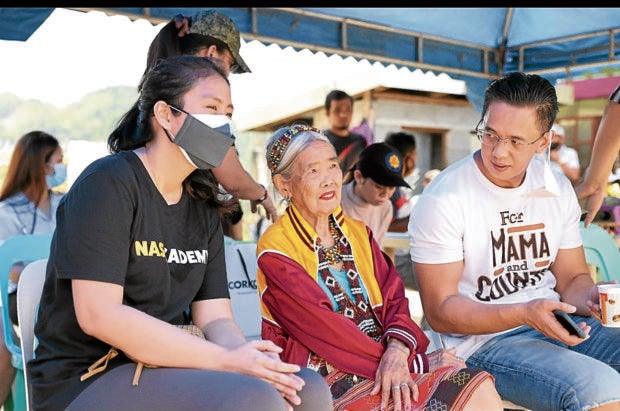 ALL IS WELL Apo Whang-ud (center) shares a moment with lawyer Marlon Bosantog (right), director of the National Commission on Indigenous Peoples in the Cordillera, and Jacqueline Maye Lim, head for Philippine operations of Nas Academy, during the reconciliation meeting at the village of Buscalan in Tinglayan, Kalinga, on Sunday. —PHOTO COURTESY OF NAS ACADEMY

QUEZON, Isabela, Philippines — The online academy of Israeli vlogger and content creator Nuseir Yassin, popularly known as Nas Daily, on Sunday apologized to Apo Whang-ud following a reconciliation over the controversial contract for teaching the Kalinga art of tattooing.

A team sent by Yassin to the village of Buscalan in Tinglayan town, Kalinga province, reconciled with the acclaimed “mambabatok” (traditional tattoo expert) and the Butbut indigenous communities through customary laws and practices on conflict resolution, according to the National Commission on Indigenous Peoples (NCIP), which arranged the dialogue.

In a statement, the NCIP said elders of the Butbut indigenous communities accepted the “sincere apology” of Nas Academy over the latter’s failure to follow the proper procedure in advertising or teaching the Kalinga art of tattooing.

Citing its mandate to ensure that the rights to cultural integrity of indigenous cultural communities and indigenous peoples “are recognized, respected, promoted and protected,” the NCIP said it initiated the meeting “to put this issue to rest.”

It was in August when the NCIP began reviewing the contract between Nas Daily and Whang-ud, including a forensic examination of the supposed thumb mark of the tattoo artist on the document that would have given the academy exclusive rights over the image and voice, and the video recordings of her online tutorials being offered to the public for a fee.

Lawyer Marlon Bosantog, director of the NCIP in the Cordillera, said an initial validation of the contract showed an “apparent disparity” in Whang-ud’s thumb mark and the one affixed to the contract.

The NCIP also described the contract as “grossly onerous” on the part of Whang-ud, noting the provisions were not explained or discussed to her or to her representative.

Nas Academy refuted the NCIP’s allegations, saying it conducted “due diligence” in obtaining Whang-ud’s or her representative’s consent and signature. Whang-ud would also receive a share of the revenue from the supposed project, it said.

During Sunday’s dialogue, Nas Academy and Whang-ud decided to declare the contract “null and void,” as requested by the tribal elders, the NCIP said.

According to the NCIP, representatives of the academy joined the Buscalan community in a shared meal as a “sign of healing and reconciliation” based on the customs and tradition of the Butbut tribes.

Lawyer Josabeth Alonso, country head of Nas Academy, said the reconciliation was “anchored on humility and respect,” adding that it was “by far one of the best values they can demonstrate and teach their students.”