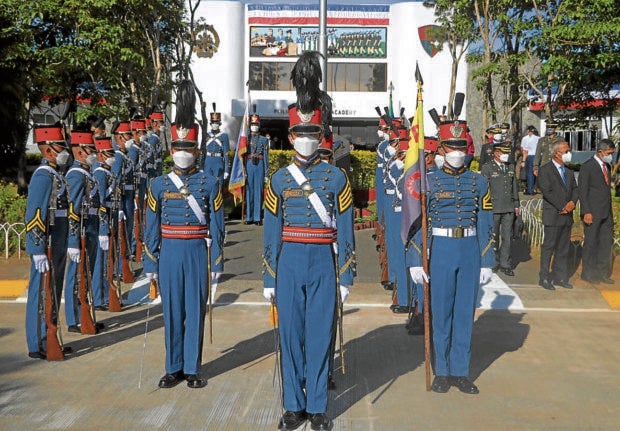 IN STEP WITH IT The faculty of the country’s premier military school introduced a course to develop the skills of the officers in digital technology. —FILE PHOTO

BAGUIO CITY, Benguet, Philippines — Like other students, cadets of the Philippine Military Academy (PMA) had to rely on the internet as they continued their studies from home.

The new mode of learning has helped minimize the risk of COVID-19 infection in Fort del Pilar, as the PMA was locked down early last year.

Yet more than 50 cadets were still treated for COVID-19 at that time, although the entire academy has since been vaccinated.

The pandemic has been a “rough and rocky road” for the academy, as Air Force Lt. Gen. Ferdinand Cartujano, PMA superintendent, described its impact when he spoke at the PMA’s 123rd Foundation Day on Saturday.

He said the PMA has been prompted to make some changes in its curriculum — such as the introduction of a course on information technology to develop skills in digital technology among the officers.

To pursue its modernization, the country’s premier military school is getting help from big business, in particular, Ayala Corp. and businessman Manny V. Pangilinan.

Pangilinan consulted with the faculty about the services they need under a fully digitized campus environment, a PMA professor said on condition of anonymity.

“But we were not technologically savvy, so many of us advocated better, stronger, faster, more stable connectivity,” the professor said.

He said today’s cadets appeared more comfortable with the digital environment, despite the isolation that has compounded their stay in Baguio, away from their homes.

The professor said “it has been difficult teaching them online because I never know if they sneak a peek at their social media in between lessons.”

But otherwise, he said, “the cadets coped very well and the evaluation of their online and modular lessons [has been] excellent, although, of course, there is room for improvement.”

Further complementing the PMA’s digitalization is the Baguio Broadband Network which the city government plans to roll out by next year.

To enhance “interactive and collaborative teaching,” Cartujano said, “we have successfully integrated the academy’s cadet information system [in which the] cadets’ personal information and academic [performances] are encoded.”

He disclosed further that “we aim to enhance our research capabilities through collaboration with the National Research Council of the Philippines.”

A post on the PMA website reflected on how major events such as the pandemic have helped shape its mission throughout its history.

In 1935, Commonwealth Act No. 1 formally organized the PMA from its predecessor in the early years of US colonial rule, the Philippine Constabulary Academy.

The PMA was mandated by that law “to train selected candidates for permanent commission to the regular force.”

The academy was closed before the arrival of the invading Japanese but was reopened after the war, with cadet training refined further to include the development of “character, basic and broad military skills… [and] the high ideals of honor, duty, integrity, discipline and leadership in which to anchor firmly [the cadet’s military] career.”

Cartujano said that before the pandemic, the PMA was about to adjust its curriculum in keeping with changes in the defense environment.

The academy, for example, has introduced a course on national security, besides upgrading its facilities.

He said the changes in the PMA have also been multifaceted.

For instance, the academy has promoted social and religious diversity by opening an “Islam Cadet Prayer Room,” Cartujano said.

According to him, Pangilinan has pledged to improve “PMA’s IT [information technology] programs and drawing laboratories [as well as its] internet access points and bandwidth.”