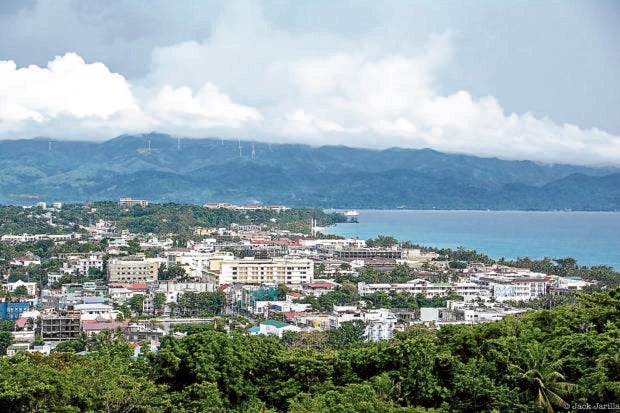 BEYOND THE BEACH This panoramic view of Boracay Island, taken in October 2020, seems to bolster a 2018 study cited by the Boracay Inter-Agency Task Force, which shows that the island, famous for its white sand beach and first-class accommodations, may be nearing its carrying capacity amid a construction boom. —JACK JARILLA

ILOILO CITY, Iloilo, Philippines — The Boracay Inter-Agency Task Force (BIATF) has reiterated its position that the administrative body that will manage Boracay Island should be a regulatory council, not a corporate body.

In an online press conference on the island on Friday, Environment Secretary Roy Cimatu, BIATF chair, said he was “standing by the initial position” of the BIATF that the body that would take over the administration of the island should be similar to the task force, rather than the proposal of Congress.

The House of Representatives last month passed on the third and final reading House Bill No. 9286, or the act creating the Boracay Island Development Authority (Bida) as a government-owned and controlled corporation (GOCC) with corporate powers that will formulate the Boracay Action Plan.

The Bida is intended to replace the BIATF, which was created in April 2018 to supervise the rehabilitation of the island. The term of the task force has been extended until June 30, 2022, when President Duterte steps down from office.

In its position paper, the BIATF had said that HB 9826 provided for the creation of a special economic and tourism zone, including Boracay Island, and empowered the Bida to undertake reclamation projects.

But the BIATF said Boracay was already faced with “overdevelopment” and “overtourism” that even as early as 2018, there was already a study which showed that the structures being built on the island—hotels, resorts, residential and other commercial establishments—were starting to exceed the island’s carrying capacity.

Aklan officials and many residents on the island have also opposed a GOCC-type authority, particularly on the power granted to the Bida to issue business licenses and building permits and to set a limit to real property taxes that the local government can collect.

They said these provisions would violate the policy of devolution and decentralization, adding that the creation of the Bida as a GOCC would be “revolting in law, in public policy, in common good and general welfare.”

“Make no mistake, this is an act of unjust taking driven by people who are salivating at the prospect of using the island and its natural resources as a cash cow to satisfy their personal greed, rather than the betterment of residents,” she had said in a statement.

Read Next
Robredo’s 2018 proposal to suspend fuel tax ignored
EDITORS' PICK
97% of COVID-19 beds at PGH currently occupied
Gear up and get ready to play with Yamaha Mio Gear
Acer starts the year off strong with the Aspire Vero National Geographic Edition
Japan brings back virus restrictions over Omicron surge
Over 3 Million worth of prizes to be won at Smart Padala’s SENDali Manalo Promo!
Uproar over no vax, no ride policy: Maybe it’s time for gov’t to say sorry—Bello
MOST READ
1Sambayan names 7 aspirants in its 2022 Senate lineup
Emma Stone calls Andrew Garfield a ‘jerk’ after he ‘lied’ about his ‘Spider-Man: No Way Home’ appearance
Guevarra to Acosta: Obey rules on unvaccinated
Commuters affected by ‘no vax, no ride’ policy may file class suit —Lacson
Don't miss out on the latest news and information.