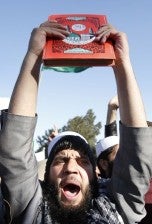 HOLY PROTEST An Afghan protestor holds a copy of Islam's holy book Quran as he shouts slogans during an anti-US demonstration in Jalalabad, east of Kabul, Afghanistan, Wednesday, Feb. 22, 2012. Anti-American demonstrations continued for a second day Wednesday in Afghanistan over what the U.S. has said was the inadvertent burning of Muslim holy books at a NATO military base. (AP Photo/Rahmat Gul)

KABUL, Afghanistan— Clashes between Afghan troops and protesters angry over the burning of Muslim holy books at a U.S. military base have left at least seven people dead and dozens wounded as anger spread despite U.S. apologies over what it said was a mistake.

Wednesday’s demonstrations across four eastern provinces illustrated the intensity of Afghans’ anger at what they saw as foreign forces flouting their laws and insulting their culture.

The violence was also a reminder of how easily Afghan-U.S. relations can deteriorate as the two countries work to forge a long-term partnership ahead of the withdrawal of foreign forces in 2014.

The unrest started Tuesday when Afghan workers at the main American military base, Bagram Air Field, saw soldiers dumping books in a pit where garbage is burned and noticed Qurans and other religious material among the trash.

The top U.S. and NATO commander, Gen. John Allen, quickly issued an apology and telephoned President Hamid Karzai and major news organizations to explain that a collection of religious materials, including Qurans, had been mistakenly sent to be incinerated. As soon as someone realized what they were burning, they stopped and retrieved what was left, Allen said.

Four copies of the Quran were burned before the incineration was halted, according to initial Afghan government reports.

Anger about the burning spread overnight. A single demonstration outside the Bagram base on Tuesday gave way to three protests in the capital, Kabul, on Wednesday, along with demonstrations in the major eastern city of Jalalabad and in Logar and Parwan province, where Bagram is located.

In Kabul, about 2,000 people massed outside a heavily guarded housing complex for foreigners, chanting “Death to America!” as they hurled rocks at the compound’s reinforced walls and set a fuel truck ablaze. The complex — known as “green village” because it boasts security equal to a military base — houses foreign contractors, police and some coalition military forces.

Eighteen-year-old Mohammad Shaker said he first heard about the Quran burning on Tuesday, and he and other members of his mosque decided to take to the streets Wednesday after morning prayers.

“This is not the first time they’re doing these things. They are killing civilians and taking photos of them. Every day they kill civilians with airstrikes. We can’t accept their crimes in our country,” Shaker said.

The demonstrations prompted the U.S. to lock down its embassy and bar its staff from traveling.

By nightfall, seven people had been killed — four in Parwan province and one each in Kabul, Jalalabad and Logar province, and dozens were wounded, the Interior Ministry said. In some cases, security guards or police were accused of shooting protesters, while in others, officials said the shooting started from within the mob of demonstrators.

The country’s council of Muslim clerics called the apologies from U.S. authorities insufficient and said military officials should punish those responsible.

“Disrespecting religious materials is never acceptable,” the council said, condemning what it called an “un-Islamic and inhumane act.”

“The people have the right to protest peacefully, but I appeal to my countrymen not to resort to violence,” Karzai said in a statement. He also urged the Afghan security forces to protect the protesters, not battle them.

Karzai said he shared the Afghan people’s pain at hearing of the Quran desecration, but asked them to stay calm.

“Please be patient and wait for the end of the investigation,” Karzai said.

German Brig. Gen. Carsten Jacobson said the international coalition would issue a “very clear statement” of what happened and those responsible would be held accountable. He said the incident had “grave implications” for the war effort.

Gen. Martin Dempsey, chairman of the U.S. Joint Chiefs of Staff, told reporters he was hopeful he incident would not rupture relations with the Afghan government.

“It wasn’t intended in any way to be an act of malice toward a particular religion or its practices,” Dempsey said at a Navy base in Florida. Asked whether NATO troops were in greater danger as a result of Afghan outrage over the Quran burning, he said: “This event raises my concern, sure.”

U.S. officials said the materials had been taken from the shelves of a detention center library because they contained extremist messages or inscriptions. The White House said it was an accident that they were sent to be burned.

Karzai, however, appeared ready to use the uproar to his political advantage.

When Deputy Defense Secretary Ash Carter called with an apology, the Afghan leader said the incident could have been prevented if Afghans were in charge of the detention center.

“The sooner you transfer the prison, the sooner you will be able to avoid such problems and unfortunate incidents,” Karzai told Carter, according to a statement provided by the president’s office. Karzai has set a March 9 deadline for the U.S. to hand over control of the Parwan detention facility adjoining Bagram, but the Americans have said so far the Afghan justice system is not yet capable of overseeing the operation.

Adding to the heightened anti-foreigner sentiment in Afghanistan, Taliban spokesman Zabiullah Mujahid issued a statement Wednesday encouraging the nation’s youth to join the insurgency, not the ranks of the Afghan security forces.

Mujahid said the Taliban has ordered all its commanders to embrace and protect the families of any Afghan policeman or soldier who turns his gun on foreign troops. “Call them heroes,” he said.

A rising number of Afghan security forces, or militants wearing their uniforms, have shot and killed U.S. and NATO service members. On Monday, gunmen in Afghan police uniforms opened fire on NATO troops in southern Afghanistan, killing an Albanian soldier. Last month, France suspended its training program and threatened to withdraw its forces a year ahead of schedule after an Afghan soldier shot and killed four French soldiers on a base in the east.