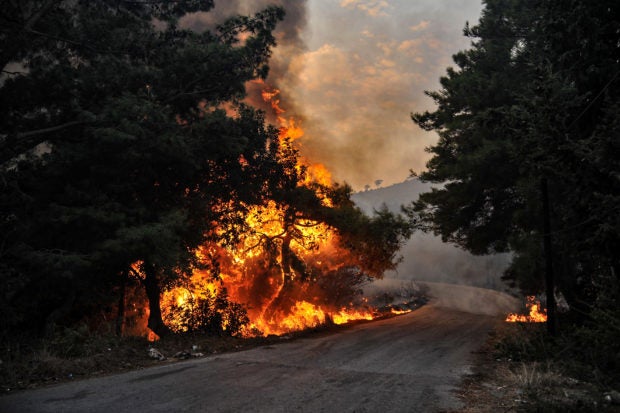 FILE PHOTO: A fire burns at a forest in Latakia province, Syria in this handout released by SANA on October 9, 2020. SANA/Handout via REUTERS

AMMAN — Syria executed 24 people it said had set fires that swept swathes of forests mainly in the coastal province of Latakia, the ancestral home of Syrian President Bashar al Assad, the justice ministry said on Thursday.

Those executed on Wednesday were charged with committing “terrorist acts that led to death and damage to state infrastructure, public and private property,” the ministry said.

It said 11 others were sentenced to life in prison on the same charges from dozens arrested at the end of last year who confessed to igniting the fires that began in September 2020 and lasted until mid-October.

Although executions are common in the tightly-run country with a powerful security apparatus, it is rare to publicize such a large number of executions on a single day.

The justice ministry statement said tens of fires swept forests and farmland and burnt homes in dozens of villages and towns in Latakia and Tartous provinces and also the central province of Hama.

No details were provided on where and how the executions took place in a country where international human rights groups say many detainees are executed without trial and where security prisons have tens of thousands of detainees.

Assad visited the devastated rural areas near his ancestral home of Qardaha in Latakia, inhabited mainly by his minority Alawite sect that dominates the higher echelons of power in the security forces and army.

The huge fires caused tens of millions of dollars of losses in cultivated plots of mainly citrus, apples, and olive trees that many poor Alawite farmers rely on to supplement meager low-paid state jobs.

It also damaged the

FILE PHOTO: A fire burns at a forest in Latakia province, Syria in this handout released by SANA on October 9, 2020. SANA/Handout via REUTERS

main part of the state-owned tobacco company that is a mainstay of the coastal area’s economy.

State television showed alleged confessions of some of the culprits who said they were paid to set the deliberate fires.

The authorities had at the time blamed Syria’s foreign and internal enemies for igniting the fires as part of what it said was economic warfare. The country’s decade-old war has led to tens of thousands of deaths, displaced millions, and led to a refugee crisis.

Read Next
Outgoing UN envoy says Myanmar has spiraled into civil war
EDITORS' PICK
Senate bill seeks to penalize employers requiring employees to work during rest hours
Acer starts the year off strong with the Aspire Vero National Geographic Edition
Gear up and get ready to play with Yamaha Mio Gear
Marcos-era elections: Not what his son signed up for
If elected VP, Sara Duterte will push for mandatory military service for all Filipinos
Over 3 Million worth of prizes to be won at Smart Padala’s SENDali Manalo Promo!
MOST READ
Jose Manalo’s son Benj pays tribute to late mother: ‘You’re a testimony of God’s love’
‘Sampal sa gobyerno:’ Drilon wants unvaxxed PAO chief barred from working
Ferdinand Marcos’ elections: Not the same as the one his son is now taking part in
Vice mayor slams Vico Sotto for turning Pasig into a ‘puro palabas’ city
Don't miss out on the latest news and information.