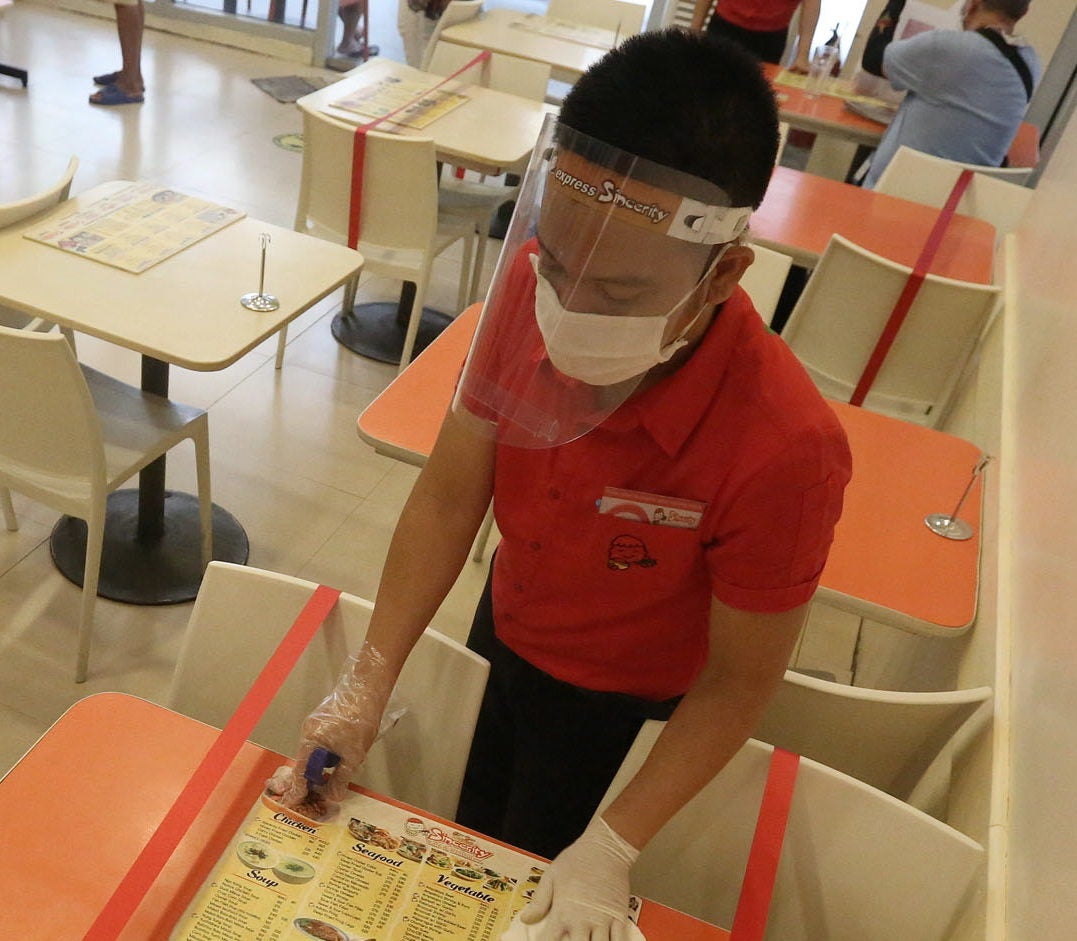 NEW POSITION After saying earlier that non-vaccination is not a legal basis for dismissal, Labor Secretary Silvestre Bello III (right) on Thursday said establishments covered by IATF guidelines for restaurants and spas can fire employees who refuse to get inoculated. —MARIANNE BERMUDEZ

MANILA, Philippines — Establishments that are allowed to offer dine-in or in-person services under the relaxed alert levels so long as their workers are vaccinated can withhold the salary of—or even fire—employees who are not vaccinated, Labor Secretary Silvestre Bello III said on Thursday.

He said the recent guidelines of the Inter-Agency Task Force for the Management of Emerging Infectious Diseases (IATF) exempted certain establishments from the “no vaccine, no work” and “no vaccine, no pay” policies.

Bello was referring to the IATF rules on the implementation of the five-tier alert level system for COVID-19 response in pilot areas dated October 13. They listed the establishments and activities that are allowed to open at a certain capacity to fully vaccinated customers “provided that all workers/employees of these establishments are fully vaccinated against COVID-19” and that health protocols are followed.

Bello stressed that while vaccination was not mandatory for all workers, the IATF resolution required all workers in those establishments to be fully vaccinated.

“There is no legal basis for mandatory vaccination for all workers. The IATF resolution is only for some establishments like restaurants and spas. They were allowed to offer dine-in services or in-person services provided that employees are vaccinated. The legal basis of restaurants and spas and other similar establishments is the resolution of the IATF,” the labor chief said in a text message on Thursday.

In a television interview Thursday morning, Bello categorically said that the IATF guidelines provided employers with the legal basis to withhold the salary of employees who are not vaccinated.

“I’ve already said you can’t dismiss an employee without legal basis. Nonvaccination is not a legal basis [for dismissal]. However, there is an IATF resolution saying that under alert level 3, restaurants can operate but the employees and customers should be vaccinated,” the labor chief said.

“You have that legal basis now, the IATF resolution. There is basis now to hold the pay because of violation of the IATF ruling,” he added.

Bello also said that establishments covered by the IATF guidelines could fire employees who refuse to get vaccinated.

“There is now an obligation on the part of employers to make sure their employees are vaccinated. [The employer] can now require employees to get vaccinated because there is now a legal basis,” he said.

Under the IATF guidelines, among the establishments and activities that are allowed to operate at a limited capacity in areas under alert level 3, such as Metro Manila, include dine-in services in restaurants; personal care establishments, such as barbershops and spas; fitness studios; film and television production; venues for parties and conferences; tourist attractions, and cinemas and movie houses.

Bello’s latest position alarmed labor groups. The Trade Union Congress of the Philippines (TUCP) said Bello was wrong to invoke the IATF guidelines as a basis for employers in certain establishments to let go of their unvaccinated employees.

“Nothing in the guidelines on the alert level [system] says unvaccinated workers can be fired. It is really wrong for Bello to say so,” said TUCP president and party-list Rep. Raymond Mendoza.

He said it was better for management to educate and convince their workers to be vaccinated, “rather than invoke the IATF resolution to compel and force them to be vaccinated and quoting Secretary Bello as saying [the employees] can be fired.”

Sonny Matula, president of the Federation of Free Workers and chair of the Nagkaisa coalition, questioned the exemption provided by the IATF guidelines, which he said “misrepresented existing law and ultimately defies the will of Congress.”

“This recognition that some employers can exercise ‘no vaccine, no work’ is not only running contrary to the existing law of voluntary vaccination but is also unreasonable,” said Matula, who is also a veteran labor lawyer.

Section 12 of Republic Act No. 11525, or the Act Establishing the COVID-19 Vaccination Program, enacted last February, states that vaccine cards “shall not be considered as an additional mandatory requirement for education, employment and other similar government transaction purposes.”

In Congress, 1-Pacman Rep. Enrico Pineda said in a statement on Thursday that requiring a worker to be vaccinated to make a living was not right.

“Restricting access to a livelihood on the basis of one’s choice not to be vaccinated is violative of their basic right to choose, their right to free will. My body, my decision,” Pineda said.

House Deputy Speaker and Cibac Rep. Eduardo Villanueva also said in a statement Wednesday night that the “no vaccine, no work” policy was “devoid of compassion.”

“Depriving laborers of salary they rightfully earned with sweat and blood is a spit on the face of human dignity and the dignity of work,” he said.

Asked to comment on Bello’s latest statement, presidential adviser for entrepreneurship Joey Concepcion said he was supposed to send a letter to the labor chief today about requiring only vaccinated employees in certain sectors, such as restaurants and spas.

Ahead of the letter, he said he already texted Bello about it, which he said might help explain Bello’s recent position.

“We have no choice. The restaurants and the spas and the salons are going to accept only the vaccinated because we cannot allow the unvaccinated now. If the people serving them are unvaccinated, it’s a double standard. We have to be consistent,” Concepcion said in a phone interview on Thursday. —With reports from Nestor Corrales and Roy Stephen C. Canivel