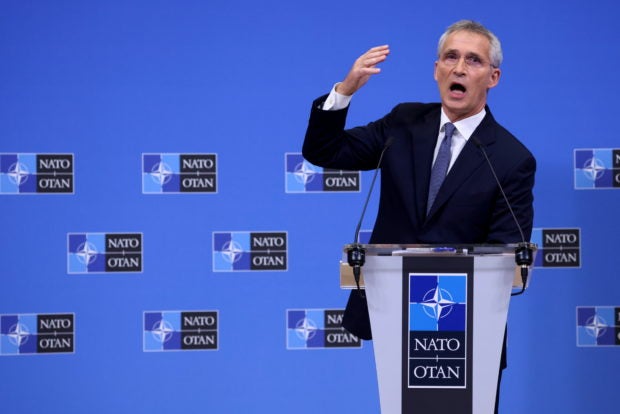 NATO Secretary General Jens Stoltenberg speaks during a news conference ahead of a meeting of NATO defence ministers at the alliance’s headquarters in Brussels, Belgium October 20, 2021. REUTERS

BRUSSELS — Nato defense ministers are set to agree a new master plan on Thursday to defend against any potential Russian attack on multiple fronts, reasserting a bid to deter Moscow despite the alliance’s new focus on China, diplomats and officials said.

The strategy, which is confidential, goes beyond existing regional defense plans and aims to prepare for any simultaneous attack in the Baltic and Black Sea regions, possibly including nuclear weapons, hacking of computer networks or from space.

Officials and diplomats say no such attack is imminent. Russia denies any war-like intentions and says it is Nato that risks destabilizing Europe with such preparations.

But U.S. officials, Nato diplomats and former officials say the “Concept for Deterrence and Defense in the Euro-Atlantic Area” – and its strategic implementation plan – is needed as Russia develops advanced weapon systems and deploys troops and equipment closer to allied borders.

“If you have that kind of major conflict, it will require activity across the entire area of operations,” said a senior U.S. government official. “Various things could happen at the same time, and that really requires holistic planning.”

In May, Russia amassed some 100,000 troops on its border with Ukraine, the highest number since Moscow annexed Crimea in 2014, according to Western officials. In September, Russia used new combat robots in large military drills with its ex-Soviet ally Belarus that have alarmed Baltic allies.

Unveiled in 2018, they include nuclear-capable hypersonic cruise missiles that could evade early-warning systems.

“To me, this is the more likely flashpoint than the Baltics,” Hodges said, noting fewer big allies such as Britain and France with a strong presence in the Black Sea, and Turkey more focused on conflict in Syria.

Jamie Shea, a former senior Nato official now at the Friends of Europe think-tank in Brussels, said the plan might also help to cement a focus on Russia at a time when the United States, Britain and France are developing Indo-Pacific strategies.

The allies are seeking to boost their presence in the Indo-Pacific and counter China’s rising military power, deploying more ships to keep open sea routes.

“The assumption up until now, has been that Russia is a nuisance, but it’s not an imminent threat. But the Russians are doing some worrying things, they’re practicing with robotics and hypersonic cruise missiles could be very disruptive indeed,” Shea said.