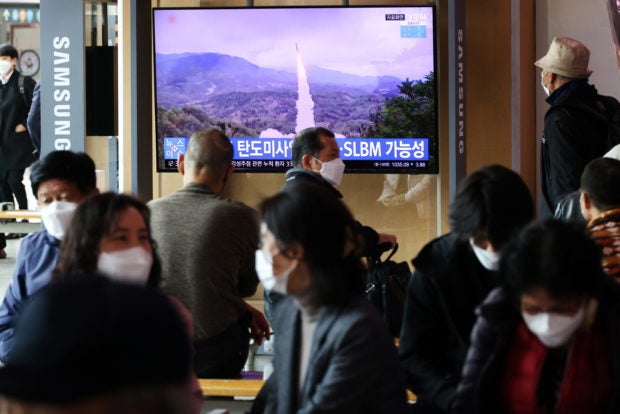 SEOUL  – North Korea said on Thursday the United States was overreacting to its recent missile test and questioned the sincerity of Washington’s offers of talks, warning of consequences.

This week’s test of a new ballistic missile from a submarine was part of North Korea’s mid- and long-term plan to bolster self defence and was and not aimed at the United States or any other country, an unnamed spokesperson at Pyongyang’s foreign ministry said, according to the official KCNA news agency.

Washington had taken “overly provocative moves” by calling the test a violation of U.N. Security Council resolutions and a threat to regional peace and stability, the spokesperson said.

The Security Council met on Wednesday over the launch at the request of the United States and Britain, and the U.S. envoy urged Pyongyang to accept offers of talks, reiterating that Washington has no hostile intent toward it.

“It is a clear double standard that the United States denounces us for developing and testing the same weapons system it already has or was developing, and that only adds suspicions to their sincerity after saying they have no hostility towards us,” the spokesperson said in a statement carried by KCNA.

The United States and the council could face “more grave and serious consequences” if they opted for wrong behaviour, the spokesperson said, warning against “fiddling with a time bomb.”

Read Next
Pig kidney works in human patient in ‘potential miracle’
EDITORS' PICK
Acer starts the year off strong with the Aspire Vero National Geographic Edition
Comelec division junks petition to cancel Marcos COC for president
PH logs 37,070 more COVID-19 cases; over 33K others recover
The best of bayside and city living at SMDC’s Sail Residences
‘Not yet the end’: Lawyer says Marcos Jr’s DQ cases to take lengthy process
Over 3 Million worth of prizes to be won at Smart Padala’s SENDali Manalo Promo!
MOST READ
NBI foils escape attempt of Kerwin Espinosa, two others
Marcos camp ‘extends hand of unity’ after COC cancellation bid is thrown out
Wendell Ramos finally gets to hold his newborn for the 1st time
No vaccine, no French Open for Djokovic, says French Sports ministry
Don't miss out on the latest news and information.