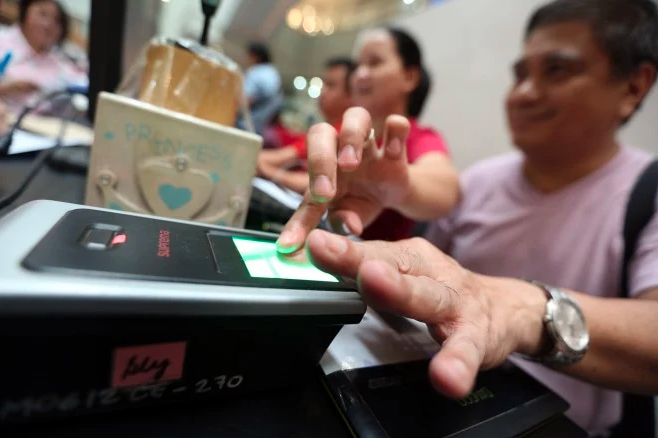 MANILA, Philippines—With over 300 certificates of candidacies (COC) submitted during filing week from Oct. 1 to Oct. 8, all eyes are now on the final list of candidates for next year’s elections — which is expected to be posted by the Commission on Elections (Comelec) soon.

The Comelec said it was hoping to release its official list of candidates by December. Until then, the poll body will screen all candidates who filed their COC for president, vice president, and senator. 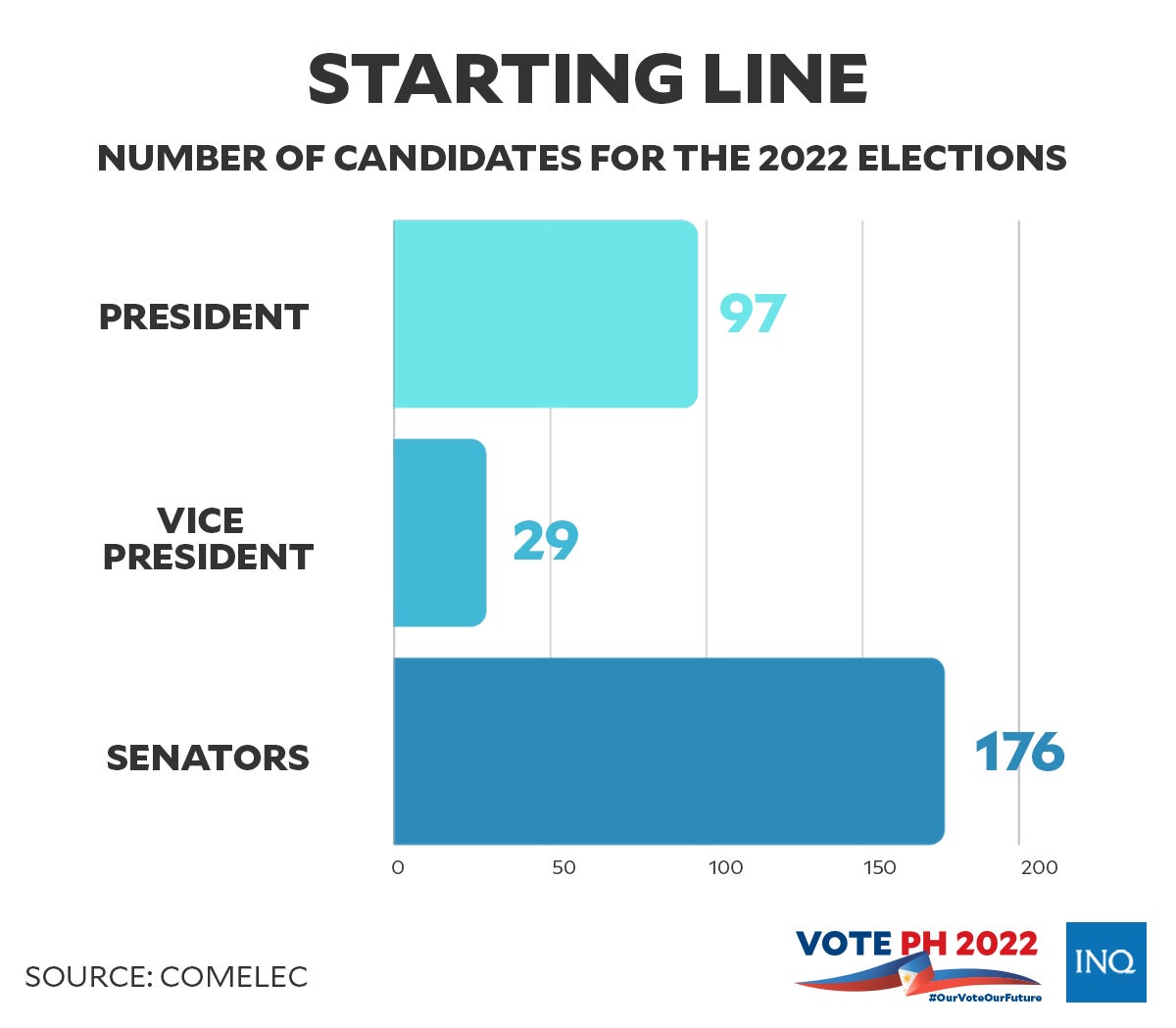 These questions have been answered here.

Not all 97 candidates for president, 29 vice-presidential aspirants, and 176 senatorial hopefuls might make it to Comelec’s final list of candidates — which will be included in the ballot for the 2022 elections.

Under Rule 23 of the Comelec’s Rules of Procedure, the poll body has the authority to reject the COC of an individual for any elective office.

What is the ground for denial, rejection, or cancellation of COC? 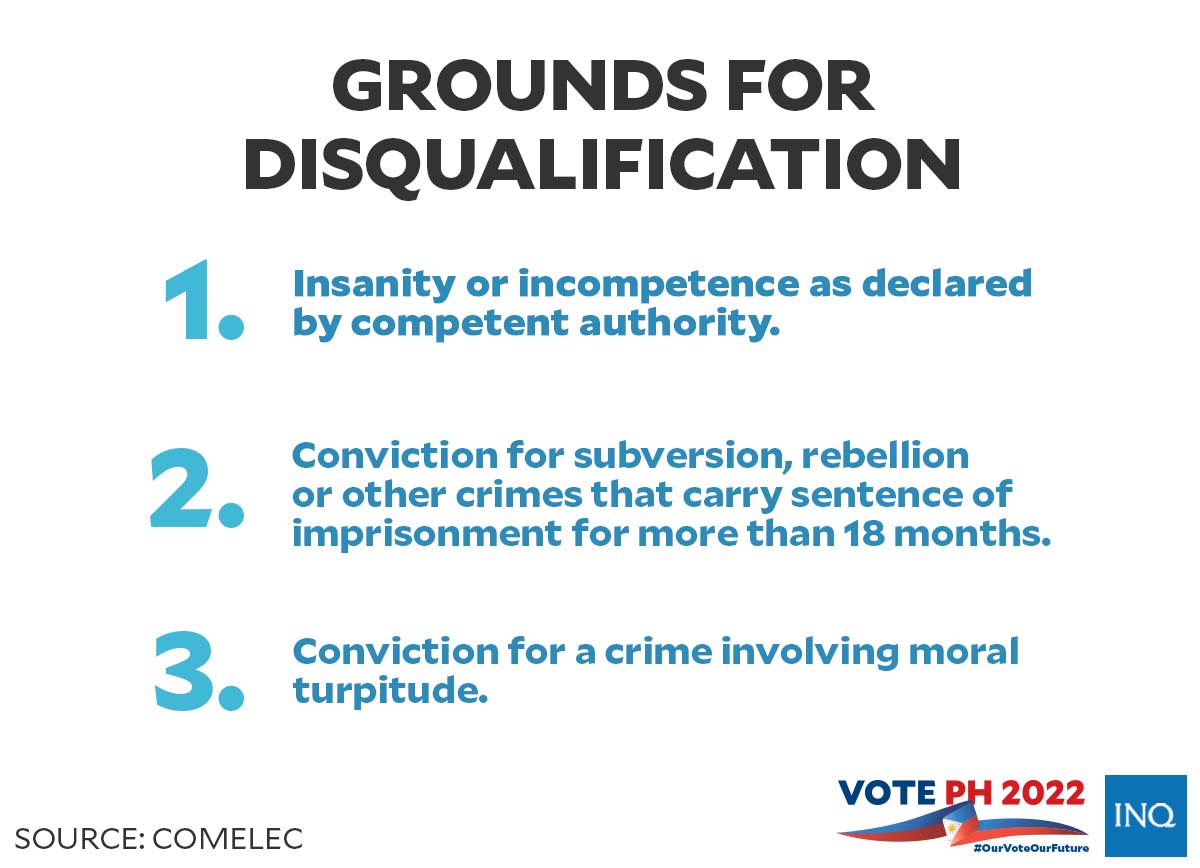 Section 1 of the rule stated that registered voters and a registered political party, organization, or coalition of political parties may file a verified petition to deny due course to or cancel a COC if “any material representation contained therein as required by law is false.”

False material representation on a candidate’s COC may be about the candidate’s:

When can such petition be filed?

Where to file petition?

The petition, according to Section 3, must be filed where the COC of the disputed candidate was filed. The petition can also be filed at the Office of the Clerk of the Commission.

“Petitions filed through mail and/or not in accordance with the herein rules shall not be accepted or docketed,” it added.

The petitioner can still re-file the petition in accordance with the rules before the period provided for the filing of petition.

The poll body may designate any of its officials, who are members of the Philippine Bar, to handle and hear the case. In cases involving barangay officials, designated officials may receive evidence.

After the Comelec receives the petition, both parties — the petitioner and the candidate who is the subject of the petition — will undergo a set procedure.

These procedures are further detailed by Comelec Resolution No. 9523.

Amid growing discussions on substitution of candidates, the poll body has clarified last week that candidates—who have been declared as placeholders for next year’s elections—are not instantly classified as nuisance candidates.

“A mere declaration to the contrary wouldn’t, in my opinion, be sufficient to overcome the intention to run which is manifested in the verified COC,” Jimenez told reporters in a Viber message when asked if the admission of being placeholder candidate could be ground to be declared as a nuisance candidate.

Who are considered nuisance candidates?

Under Section 69 of the Omnibus Election Code, the poll body may “motu proprio or upon a verified petition of an interested party, refuse to give due course to or cancel a certificate of candidacy” of individuals who fall under any of three categories:

Those who make a mockery of the election system
Those who seek to confuse voters through similarity of names between candidates
Those who have no bona fide or good faith in running for office.

Who may file petitions against suspected nuisance candidates?

Under Section 2 of Rule 24 of Comelec’s Rules of Procedures, any registered candidate vying for the same elective office may file with the Law Department of the Commission a petition to declare a candidate as a nuisance candidate.

When can these petitions be filed?

The petitions against nuisance candidates must be filed personally or through an authorized representative within five days from the last day for the filing of COC.

The Comelec, at any time before the elections, can motu proprio declare a candidate as a nuisance candidate, “subject to an opportunity to be heard.”

Under Section 12 of the Omnibus Election Code, the following individuals or aspirants are considered disqualified:

These candidates will be barred from running for office, “unless [they have] been given plenary pardon or granted amnesty.”

“This disqualifications to be a candidate herein provided shall be deemed removed upon the declaration by competent authority that said insanity or incompetence had been removed or after the expiration of a period of five years from his service of sentence, unless within the same period he again becomes disqualified,” the Election Code stated.

Candidates who have already filed their COC can also get disqualified if they are found guilty of committing any of the election offenses mentioned under Section 68 of the Omnibus Election Code.

Such election offenses include: