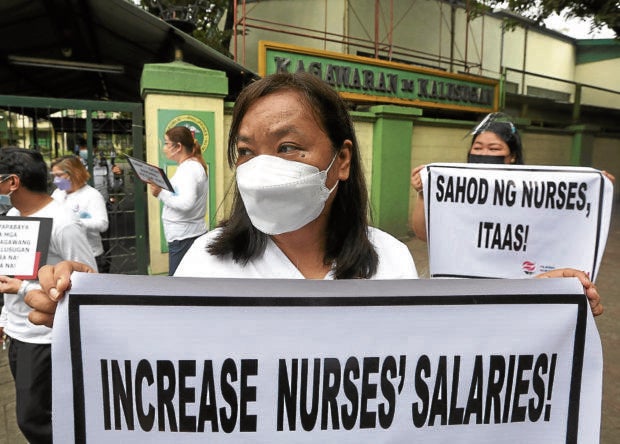 Health workers from the Filipino Nurses United held a brief protest rally in front of the Dept. of Health in Manila on Tuesday, to call for an adequate, responsive national health budget and wage increase for medical frontliners amid the Covid19 pandemic. INQUIRER FILE PHOTO/ MARIANNE BERMUDEZ

MANILA, Philippines — A nurse of three years resigned from St. Luke’s Medical Center after being offered a job in the United States and P150,000 in salary and allowances given even while waiting for her deployment abroad.

The terms of the nurse’s new employment were so attractive that Jao Clumia, president of the St. Luke’s Medical Center Employees Association, is worried that more healthcare workers from the hospital would be enticed to apply for jobs overseas, further depleting the struggling workforce in the country’s hospitals.

Private Hospitals Association of the Philippines president Jose Rene de Grano estimated that about 5 to 10 percent of nurses have resigned in recent weeks to leave for other countries, and expressed concern that their continued departure could eventually paralyze the ability of medical centers to care for patients.

“If we don’t stop their departure, maybe in another six months we might run out of nurses and our health facilities and healthcare system will be crippled,” De Grano said at the Laging Handa briefing.

He said that if the government became too lax about allowing healthcare workers to leave and they would not be replaced promptly, the workforce of hospitals would be depleted and they would be able to accept only a limited number of patients, including COVID-19 cases.

Clumia, a clinical assistant at St. Luke’s, said it was not just jobs abroad that entice nurses to leave hospitals.

Even call centers that offered high salaries have lured some nurses away from medical centers, he noted.

Aside from the issue of better pay, he said the punishing workload and the higher risk of getting infected with COVID-19 have likewise led some health workers to resign.

“St. Luke’s is the number one among private hospitals when it comes to the benefits it provides. But our nurses are not focused only on this. They are also very exhausted,” he said in a phone interview.

Since there were not enough nurses, many work for 12 to 16 hours a day because they could not just leave their patients until their replacement has arrived, he noted.

“Nurses who get very tired start thinking, ‘I will resign. I am so tired,’” he said.

The recruitment of new nurses at St. Luke’s cannot keep up with the resignations, Clumia said.

He said the management of St. Luke’s and the union were working together to preserve the workforce and make sure healthcare workers would not become overfatigued.

He said some units in the hospital have been closed to lessen the workload, but he believed this might not be enough.

“Hospitals in the country really lack manpower,” he said.

Clumia said the government should focus on providing better salaries and benefits to health workers.

Many have still not received the allowances promised to them, he said.

Nurses, often hailed as heroes amid the pandemic, earlier took to the streets to protest their delayed benefits, including their special risk allowance.

In April last year, a month after the government imposed a lockdown, the government suspended the deployment of healthcare workers to prevent a shortage of medical front-liners during the health crisis.

The suspension was lifted months later but the government set a 5,000 annual deployment cap with newly hired healthcare workers for mission critical skills, much lower than the annual average of about 16,000 health workers deployed before the pandemic.

The ceiling was raised to 6,500 this year after the 5,000 cap was reached on June 1. Still, less than 900 remained of the 6,500 slots as of August, according to estimates from the Philippine Overseas Employment Administration.

Health workers have also expressed concern about the failure of the government to release financial assistance earmarked for healthcare workers during the pandemic.