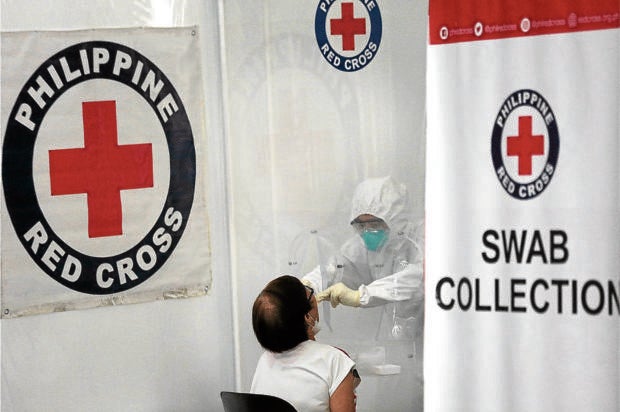 In an Oct. 13 report addressed to the PRC’s Subic Lab and made public by PRC on Tuesday, the RITM said the results of the questioned 48 tests were “found to be valid and reliable.”

RITM is a health research facility based in Muntinlupa City under the Department of Health (DOH).

The issue of the alleged false positives began last month when Sagip Rep. Rodante Marcoleta claimed that he received reports that 44 health workers in Subic falsely tested positive after availing themselves of PRC’s COVID-19 tests.

This prompted President Duterte, during his weekly taped briefing that aired on Sept. 20, to direct the DOH to look into the alleged false-positive test results from PRC.

“I also would like to ask: Are your testing facilities and equipment really as good as you say they are? Because I have heard of many false-positive cases from your laboratories. Can you enlighten the Filipino people on this?” the President said.

He was addressing Sen. Richard Gordon, who heads the PRC and is chair of the Senate blue ribbon committee investigating alleged irregularities in the government’s purchase of medical supplies from Pharmally Pharmaceutical Corp. last year.

The PRC thanked the RITM for its “unbiased investigation,” pointing out that it had become “a victim of unsubstantiated allegations in recent months” arising from “damning evidence (at the Senate blue ribbon committee hearing) against involved parties in the awarding of more than P8.7 billion in contracts for overpriced medical supplies to an undercapitalized company under the Bayanihan to Heal As One Act.”

In a separate press briefing on Tuesday, Dr. Paulyn Ubial, PRC biomolecular laboratories chief, criticized the “malicious intent” of those who launched the public hearing against the PRC on the alleged false positive tests.

“The only issue we have there is why did they call a public hearing, when they could have written us. If there was no malicious intent, they could have called us [and] we could have addressed it immediately,” she said.

Ubial added that while false positives were not impossible, based on the specificity of the RT-PCR test, there was only a 1 percent chance that the result would come back with a false positive.

She also noted that RITM’s thorough review cleared the specific lab in question.

“The specificity of the test is 99 percent. That is an accepted limitation of the study,” she said.

Ubial said that had the private citizens who claimed they received a false positive test reached out to PRC, the organization would have gladly shown its methodology and documentation.

“But this is a demolition job, they are hurting the PRC’s reputation without even checking once and for all if it is indeed a false positive or not,” she said.

President Duterte claimed during his September briefing that he had information that government employees, including hospital personnel, received false-positive RT-PCR test results from PRC laboratories.

Aside from the 44 of 49 hospital personnel tested in the PRC molecular laboratory in Subic being questioned, he said 187 of 213 members of the Presidential Security Group were also positive for COVID-19 when they got tested in a PRC laboratory in Manila, but later tested negative in a confirmatory test.

The President did not say when the tests were administered.

According to him, 13 employees of the Department of Finance also received positive COVID-19 test results last Feb. 10 but tested negative in confirmatory tests within 24 hours.