As some residents displaced by the 2017 siege get permanent shelters, others who used to share space with relatives have nowhere to go
By: Divina Suson - @inquirerdotnet
Philippine Daily Inquirer / 04:45 AM October 20, 2021 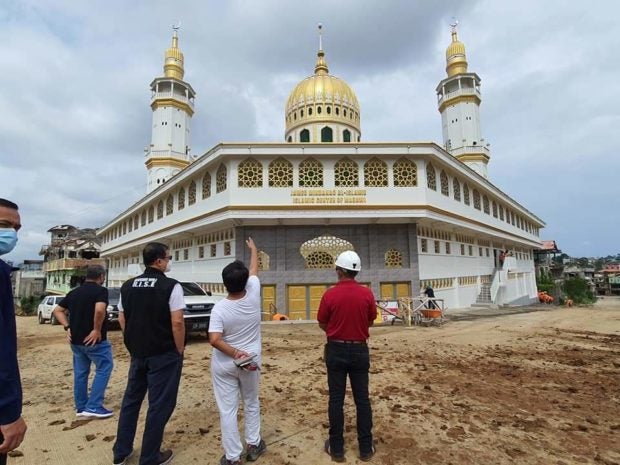 REHABILITATION Local officials inspect the rehabilitated Grand Mosque in Marawi City before it is inaugurated by President Duterte to mark the fourth year of the city’s “liberation” from the control of terror groups. —PHOTO COURTESY OF LANAO DEL SUR INFORMATION OFFICE

MARAWI CITY—After they fled their village at the height of the 2017 Marawi siege, Norhaima Ditucalan’s family and those of her four siblings sought refuge at her grandparents’ house in Ditsaan-Ramain town, some 10 kilometers away from this provincial capital of Lanao del Sur.

More than four years later, Ditucalan received one of the 250 houses that the United Nations Human Settlements Programme (UN Habitat) and the National Housing Authority (NHA) built in Barangan Gadongan here for residents displaced by the siege.

Ditucalan was one of more than 2,000 families targeted to be given permanent shelters as they could no longer go back to their homes, which were either located in areas declared as “no dwelling zone” by the government or within the most affected areas (MAA) of the five-month fighting between Islamic State-linked armed groups and the government in 2017.

Her house in Barangay Datu Naga had been demolished as it sat within the 3-meter to 6-meter easement in Lake Lanao, where settlements had been banned by the government.

Ditucalan, while cleaning the new house that her family was about to occupy, told the Inquirer that their new home was small compared to the one they left behind. But she felt better because they would no longer be crowding their grandparents’ house.

“I have six children and it is not good to give my grandparents a noisy environment,” she said.

The small space, however, could not accommodate the families of four of her siblings, who used to share with her the old three-story house in Barangay Datu Naga.

Her siblings, who also expected housing aid from the government, were categorized as “sharers,” hence, could not avail of permanent housing units.

According to Housing Secretary Eduardo del Rosario, also the Task Force Bangon Marawi (TFBM) chair, the government only sets aside a financial assistance of P35,000 per family for sharers but no housing aid is provided.

“With regard to housing, there is no money for sharers but [they] are provided with financial assistance … including those vendors who rented their stalls inside (the MAA) but lost their businesses during the siege,” Del Rosario told reporters after the turnover of the housing units. 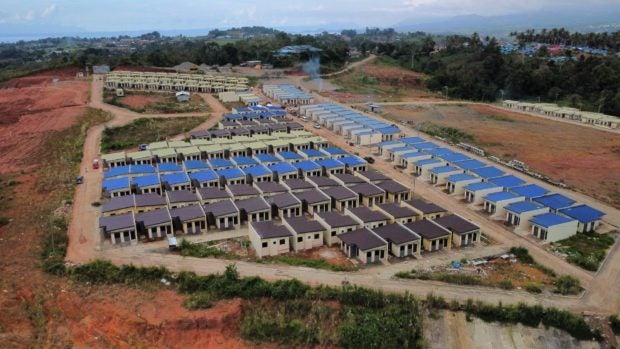 NEW HOME, NEW LIFE Marawi residents displaced by the fighting between government troops and Islamic State-linked armed groups that laid siege to their city in 2017 are starting life anew in permanent shelters provided by the UN Habitat and the National Housing Authority. —PHOTO COURTESY OF UN HABITAT

This left Ditucalan’s four siblings nowhere to go. They wanted to live with her within the 90-square-meter house but the space was not enough to accommodate them, she said.

The TFBM and the NHA have not provided data on the number of families who received financial assistance. An undetermined number of families classified as sharers have been staying in transitional shelters as the city’s rehabilitation continues.

Of the 250 permanent housing units turned over on Oct. 15, 150 units were built by the UN Habitat using the $10 million from the government of Japan while 100 units were constructed by the NHA. The land was procured and developed by the NHA.

The 150 new units brought to 429 the total number of permanent shelters that the UN Habitat already awarded to displaced families. These included the 109 units at Hadiya Village Phase 1 in Barangay Dulay West, 120 at Phase 2 in the same area and 50 units at Pamayandeg Ranao Residences in Barangay Mipantao-Gadongan.

Warren Ubongen, project manager of UN Habitat, said they were building more than 100 of the 372 units targeted to be put up in Barangay Patani.

A total of 910 permanent houses by UN Habitat are slated to be completed by December 2021 in five resettlement sites, Ubongen said.

Ditucalan, who used to earn income from the store on the ground floor of her old house, already planned to convert a small space in front of the new house into a store, which her husband will build.

“I wanted to continue my small store here with the P73,000 cash aid from the government,” Ditucalan said. The small space will serve as her only source of their income. INQ