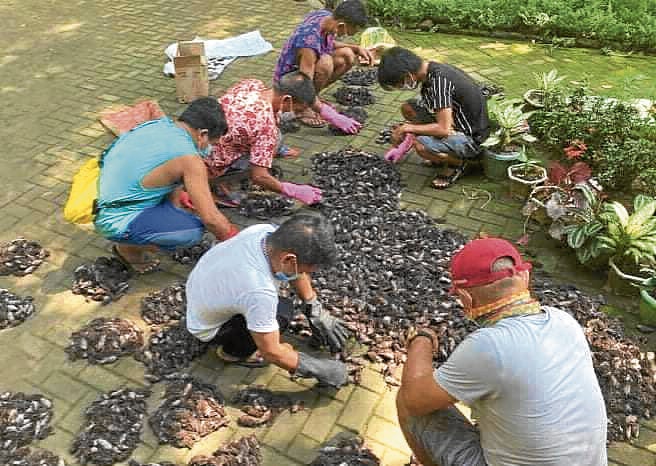 SAN MIGUEL, BULACAN—More than 6,000 wrinkle-lipped bats (Chaerephon plicatus) were seized from four suspected wildlife poachers at Biak-na-Bato National Park (BNBNP) in this town, an official of the Department of Environment and Natural Resources (DENR) said on Monday.

Paquito Moreno Jr., the DENR executive director in Central Luzon, said most of the bats were already dead when recovered from the suspects Rolando Santiago, 40; Reynante Donito Gonzales, 44; Rejie Mangahas, 28; and Ronald Santiago, 39, all residents of San Miguel.

Moreno, in a statement, said the bats were caught in a protected area and were supposed to be sold to restaurants serving exotic dishes in the province and nearby Metro Manila. The haul was estimated to cost more than P90,000.

Wrinkle-lipped bats are classified as vulnerable species under the Administrative Order No.2019-09 of the DENR, Moreno said. They are characterized by their heavily wrinkled upper lip and soft fur, and are commonly found in Southeast Asia and southern China.

“Hunting, destroying, disturbing or mere possession of any plants or animals or products derived there without permit from the Protected Area Management Board are strictly prohibited,” Moreno said.

In a separate interview on Tuesday, Don Guevarra, information officer of the DENR in the region, said the bats were discovered inside several sacks when the suspects were intercepted outside BNBNP.

The dead bats were immediately buried near the park’s forest nursery to prevent the potential spread of an infectious disease that is transmitted from animals to humans, Guevarra said. At least 100 bats were released back into the wild.

Moreno had warned the public against engaging in illegal wildlife trade and destruction of protected areas, stressing that these are penalized under existing environmental laws, rules, and regulations.

He said the suspects were also facing a maximum fine of P500,000 and up to six years imprisonment.

The 2,000-hectare BNBNP was established by former President Manuel Quezon through Proclamation No. 223 in November 1937.