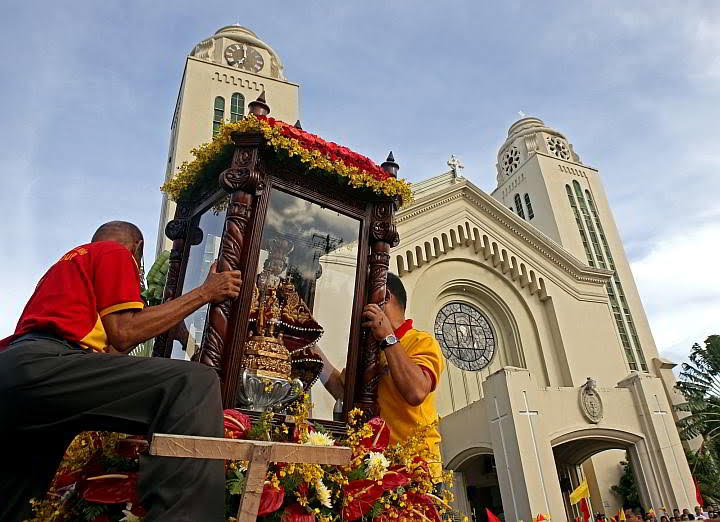 CONTRIBUTED FILE PHOTO: The glass-encased pilgrim image of the Sto Niño de Cebu visited the Redemptorist Church in this 2015 photo.

MANILA, Philippines—“I shall die for God, and for him I will give many thousands of lives if I had them.”

When Lorenzo Ruiz was asked to renounce his faith in the midst of the persecution of Christians in Japan, he said, “I am a Catholic and I accept death for God”.

He was a lay worker of the Confraternity of the Holy Rosary in Binondo, Manila, who had been accused of killing. Because of fear, he went to Japan with two Dominican priests.

In Japan, Ruiz and his companions suffered torture—water was forced down their throats, they were hanged, they were tied. Ruiz died. He was 42. 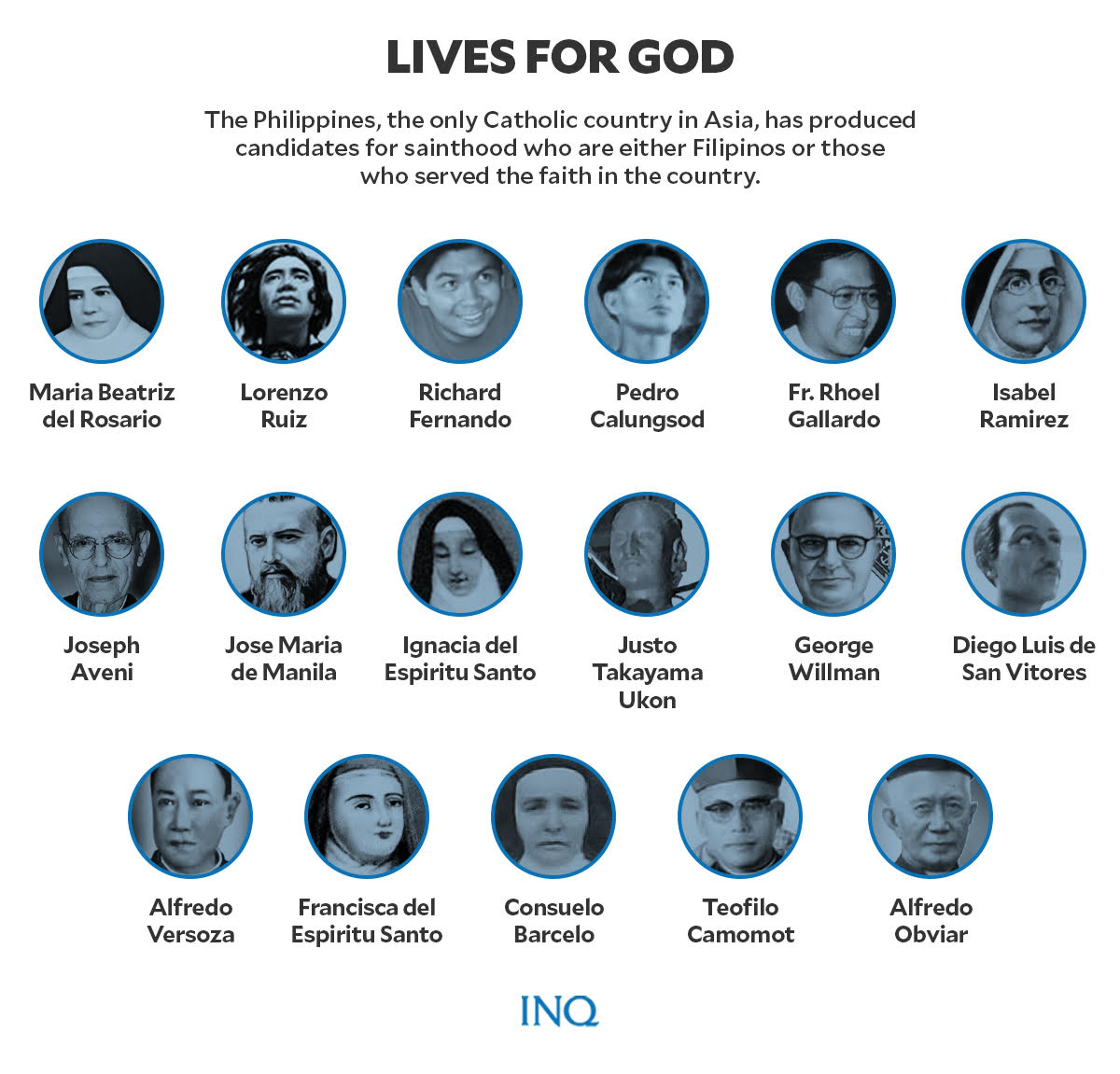 Ruiz died in 1637. It took 350 years before he was declared holy, but his martyrdom inspired many Catholics to live a life dedicated to God.

The Philippines has two saints – Ruiz and St. Pedro Calungsod, a young lay worker who was killed in Guam. He was beatified and canonized on March 5, 2000 and Oct. 21, 2012.

Encyclopedia Britannica said there are over 10,000 saints recognized by the Church, “though the names of some of these holy men and women have been lost to history.”

The United States Conference of Catholic Bishops (USCCB) said the process of declaring one a saint is called canonization–the Church declares one as sharing eternal life with God.

This begins with the Cause of Beatification and Canonization of a person, a process to examine his or her life and death. With this, the person will be called Servant of God.

The USCCB said five years should pass from the time of a person’s death before the process may begin to allow greater objectivity in evaluating the case. The Pope can dispense with this procedure.

In 2017, Pope Francis said he opened a new way to holiness – offering of life. Before this, the only ways were “martyrdom, life of heroic virtue, and exceptional cases.”

“Those Christians who, following in the footsteps of Jesus Christ and nearest to what is pleasing to him, have offered their lives for others voluntarily and freely and in this resolution have persevered until their death, are worthy of a singular estimation and honor,” said Pope Francis.

READ: How to tell Lorenzo Ruiz from Pedro Calungsod

If the diocese completes its investigation, the collected evidence will be sent to the Vatican’s Congregation for the Causes of Saints, an office that will examine the documents.

With the Pope’s approval a decree is given to say that one lived a virtuous life. The person becomes Venerable. If killed for the faith, one becomes Blessed.

To be declared blessed, a miracle attributed to the Venerable should be proven. If the miracle is verified, the Pope will declare a person blessed through beatification.

USCCB said a second miracle should be attributed to the Blessed in order for him or her to be canonized. “A proven miracle is required, even for martyrs, for canonization,” it said.

While there are only two Filipino saints, there are several individuals in the Philippines who are already on their way to sainthood, living Ruiz’s “thousands of lives offered to God.”

READ: With canonization, ‘age of saints’ seen in Philippines

San Vitores, a companion of Calungsod who was assigned to the Philippines in 1659, was beatified on Oct. 6, 1985. He was killed in Guam as he held a crucifix and fell to his knees.

Maria, a “son of the Philippines,” was beatified on Oct. 13, 2013 in Spain. He was a priest born in Manila who was later martyred because of his faith.

Ukon, a lay worker who was killed in Manila 44 days after he was exiled, was beatified on Feb. 7, 2017. He was martyred for declining to renounce his faith.

USCCB said a Venerable is one whose sainthood bid has not yet reached beatification, but “heroic virtue” has been declared by the Pope.

In the Philippines, there are religious persons who established congregations that are now regarded as Venerable, including a Filipina who established the order Religious of the Virgin Mary.

Ramirez, who was born in Manila in 1836 as the youngest of 10 children, was declared Venerable on March 26, 1999. She was one of the Sisters of Charity of the Sacred Heart of Jesus.

On Feb. 1, 2008, Ignacia, who spent her whole life in the Philippines, was declared Venerable. Her way of life attracted Filipinas who heard the call to religious life.

They were called Beatas de la Compania de Jesus. The congregation is now known as the Religious of the Virgin Mary. She died on Sept. 10, 1748.

On Dec. 20, 2012, Barcelo, who established the Augustinian Sisters of Our Lady of Consolation, was declared Venerable. She first arrived in the Philippines in 1883.

Obviar, the first bishop of Lucena, was declared Venerable on Nov. 7, 2018. He established the Missionary Catechists of St. Therese of the Infant Jesus. He died on Oct. 1, 1978

The Aleteia said Obviar “possessed an extraordinary ‘charism’ for organizing catechists as well as for teaching catechism most especially to the old folks.”

On June 11, 2019, Arroyo, a religious who established the Congregation of Dominican Sisters of the Holy Rosary, was declared Venerable.

Arroyo, who was born in Iloilo City, devoted her life to the service of the poor. She died on June 24, 1957 and was buried inside the Beaterio del Santisimo Rosario de Molo.

Del Espiritu Santo, a Filipina who established the Congregation of the Dominican Sisters of St. Catherine of Siena, was declared Venerable on July 5, 2019.

She was born in Manila and grew as a “woman of unwavering faith who carried out her mission with dauntless courage and trust.” She died on Aug. 24, 1711.

Prior to being declared Venerable by the Vatican, a person who has a sainthood bid is called Servant of God. The Philippines has 18, including a seriously ill candidate for sainthood who helped street children.

Camomot, a native of Carcar, Cebu and who became the archbishop of the province, was allegedly seen in two different places when he died. He was declared Servant of God on Oct. 15, 2010.

He died on Sept. 27, 1988 as his car crashed while on his way home after celebrating Mass and visiting a monastery. In 2018, when his body was exhumed, his remains did not emit bad odor.

On June 28, 2012, Lazaga, a resident of Laguna province who became part of the Canossian Sisters of Charity, was declared Servant of God. She made her first religious profession on Feb. 2, 1966.

Lazaga, in 1970, became sick, and accepted it with gentleness while offering her pain for the conversion of sinners. She died on Jan. 30, 1971.

On Jan. 11, 2013, Verzosa, the bishop of Lipa City when the alleged Miracle of Roses happened in 1949 where Mary was said to have appeared to a Carmelite postulant, was declared Servant of God.

He established the Missionary Catechists of the Sacred Heart in 1923. The CBCP said he is often regarded as the one who “initiated intense catechism”. Verzosa died on June 27, 1954.

Willmann, a Jesuit from New York who spent most of his life in the Philippines and was regarded as the “Father of the Knights of Columbus (KC),” was declared Servant of God on Dec. 17, 2015.

He first went to the Philippines in 1922. He was granted Filipino citizenship in 1975 for his “virtuous acts, compassionate and kind, loving service for the Filipinos”. He died on Sept. 14, 1977.

On July 30, 2017, the 26-year-old Jesuit who sacrificed his life to save mostly disabled Cambodian children from a grenade explosion, was declared Servant of God.

He died on Oct. 17, 1996, as the grenade fell behind him, saving the children. His sacrifice opened his way to sainthood as Pope Francis initiated a new way to sainthood—offering of life.

On March 29, 2019, the 17-year-old Filipino with a serious degenerative disease and spent his life helping street children through the Tulay ng Kabataan, was declared Servant of God.

As his body degenerated, Ramos, who once lived in Pasay City, strengthened his relationship with Christ, saying that his sickness is a “mission”. He died on Sept. 23, 2012.

Aveni, the former vicar general of the Congregation of the Rogationists who spent the last 30 years of his life in the Philippines, was declared Servant of God on Feb. 1, 2020.

With “complete obedience to God,” Aveni died inside the Rogationist Seminary in Parañaque City on July 24, 2010 and was buried at the Manila Memorial Park.

Gallardo, a Claretian priest who was killed by the Abu Sayyaf in Basilan, was declared Servant of God on May 4, 2021 in a Mass officiated by Isabela Bishop Leo Dalmao.

In March 2000, the Claret School of Tumahubong was attacked by Abu Sayyaf. Gallardo, who was with teachers and children, was taken hostage. He died on May 3, 2000 in the crossfire during a rescue operation.