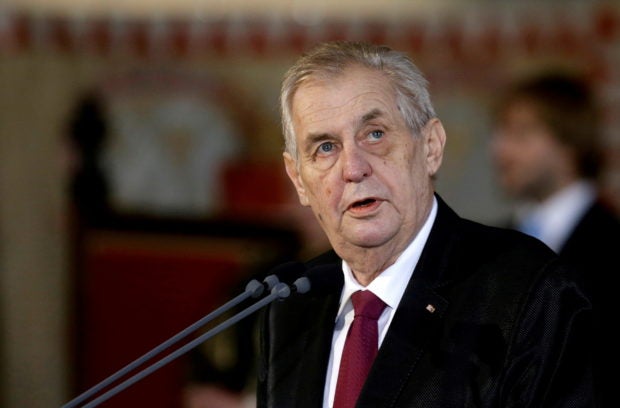 PRAGUE — Post-election talks on the Czech Republic’s new government stumbled Monday as a hospital declared the Czech president unable to perform his duties.

President Milos Zeman was rushed to a Prague hospital on October 10, a day after the general election, which was won by the three-party centre-right Together alliance.

He was expected to moderate talks on the new government, but his condition has instead led the senate to consider activating a constitutional article handing his powers to the parliament speaker and the prime minister.

“The Military University Hospital maintains that President Milos Zeman is not able to perform his duties because of his health,” senate speaker Milos Vystrcil told reporters, quoting a letter from the hospital.

Vystrcil had asked the hospital to disclose details about Zeman’s health last week.

Local media said he suffered from serious liver problems, while Zeman’s team has kept silent about his condition.

The Together alliance has already started to work on the new government together with the anti-establishment Pirate Party and the centrist Mayors and Independents movement.

The five parties now have 108 of the 200 seats in parliament and Together leader Petr Fiala is seen as the next prime minister.

Billionaire Czech Prime Minister Andrej Babis, Zeman’s political ally, said last week he would stay out of the government talks as his populist ANO movement, which narrowly came second in the vote, would go into opposition.

Zeman, a 77-year-old veteran left-winger fostering close ties with Russia and China, had earlier promised to tap Babis to form the new government, no matter the election result.

But his illness dealt a serious blow to the plan.

“Considering the character of his illness, the long-term prognosis of his health condition is seen as most uncertain,” read the letter from the hospital, obtained by the senate on Monday.

“The possibility that he will resume his work duties in the weeks to come is seen as not very likely,” it added.

Vystrcil said it was now time to “discuss when and how to activate Article 66 of the constitution”.

The article allows the parliament to declare the president “unable to execute his official duties” via a vote.

The president’s powers would then be taken over by the outgoing prime minister and the new parliament speaker, who would have the authority to name the next premier.

Last week, Zeman signed a resolution calling the first meeting of the new parliament after the election for November 8, the first step required by the constitution after the vote.

Following the meeting, Babis’s government will formally step down and the process of forming the new government can begin.

Babis faces charges over EU subsidy fraud and has angered the bloc over his conflict of interest as both a politician and a businessman.

He was also named in the Pandora Papers investigation earlier this month as he had allegedly used money from offshore firms to buy property in France, including a chateau on the French Riviera.

An EU and Nato member of 10.7 million people, the Czech Republic is due to hold the rotating EU presidency in the second half of 2022.