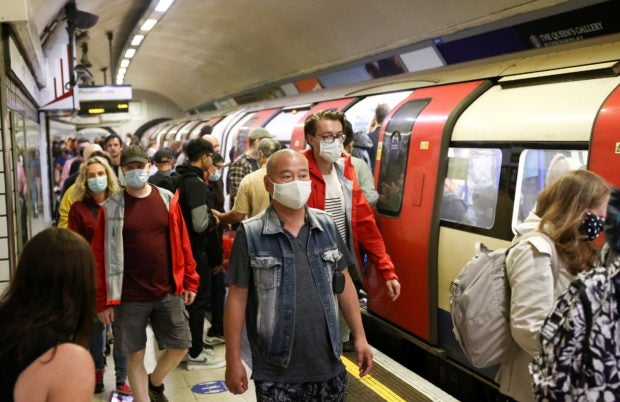 LONDON — Britain has repeatedly trumpeted its mass vaccination program against Covid-19, hailing its early approval of jabs as a key part of the long struggle to return to normal life.

But infection rates remain stubbornly high, contrasting sharply with its European neighbors and prompting fresh questions of the government.

The daily death toll has often exceeded 100 since the summer, adding to an overall toll of more than 138,000, second only to Russia in Europe.

“Sadly, at the moment the UK has a higher level of Covid-19 than most other comparable countries, this is seen not just in positive tests but in hospital admissions and deaths,” said Jim Naismith, professor of structural biology at the University of Oxford.

Across the Channel, France is recording some 4,000 cases a day and Germany 10,000. Deaths are running at about 30 and 60 daily respectively.

Questions are being asked about the gulf in figures, even if Prime Minister Boris Johnson — who survived a spell in hospital intensive care with Covid — appears unperturbed.

Scientists have already voiced fears that the high underlying number of cases could overload the state-run National Health Service, which is often under pressure in autumn and winter from respiratory infections.

“We always knew the coming months could be challenging,” Johnson’s official spokesman told reporters on Monday.

“Obviously different countries are potentially at different stages of their vaccination programs and have different measures in place, so it’s difficult to compare and contrast,” he said.

“But it’s important to strike the right balance between protecting lives and livelihoods.”

Simon Clarke, associate professor in cellular microbiology at the University of Reading, said the rate of infections among older school-aged children “is clearly the driving force behind this sustained tide of new infections”.

Vaccination rates are low among schoolchildren in Britain, and masks are no longer mandatory, although the government said earlier this month that they could be reintroduced if cases continue to rise.

While healthy children are generally able to fight off the disease, the rising case numbers “may be of concern to parents, grandparents with caring responsibilities, and teachers, some of whom may not be vaccinated or have health conditions that make them vulnerable,” said Clarke.

A deeper dive into the statistics shows that Britain conducts twice as many tests as France, and six times more than Germany.

It also shows there are currently more people in intensive care units with Covid in France and Germany than in Britain, although overall numbers in hospital are comparable in Britain and France at about 7,000.

But while France’s daily hospitalization rate has plummeted in recent weeks to around 150 admissions, Britain’s has not dipped below 500 since the summer, and has now risen to more than 900.

Infection rates in France, Germany and the Netherlands have also increased in recent days.

Proof of vaccine for visiting crowded spaces such as restaurants, theaters and nightclubs is also not mandatory in England, and has only just been introduced in Wales and Scotland, which set their own health policy.

Britain has mainly used the Oxford-AstraZeneca vaccine, which was shown to be less effective at preventing infection from the Delta variant than the mRNA vaccines such as Pfizer-BioNTech and Moderna predominantly used in Europe.

The country also began its vaccination program earlier, prompting questions about whether immunity is now waning, similar to Israel’s experience.

Only 41 percent of those vaccinated have received a booster shot so far, raising further questions about the effectiveness of the follow-up program.

Attitudes to mask-wearing also differ: according to a YouGov poll, around 15 percent of Britons say they never wear a mask in public. In Europe, it was about five percent.

The survey also indicated that far more Britons are returning to public transport or large gatherings than on mainland Europe.

That has prompted criticism that the government has become too lax on regulations, leading to complacency.

Johnson, who wants to get the country’s economy moving again, is reluctant to reimpose restrictions, including lockdowns.

But Naismith said: “Some immediate mitigation measures (masking, ventilation) would seem desirable… With winter approaching, it might be worthwhile taking stock of where we are.”