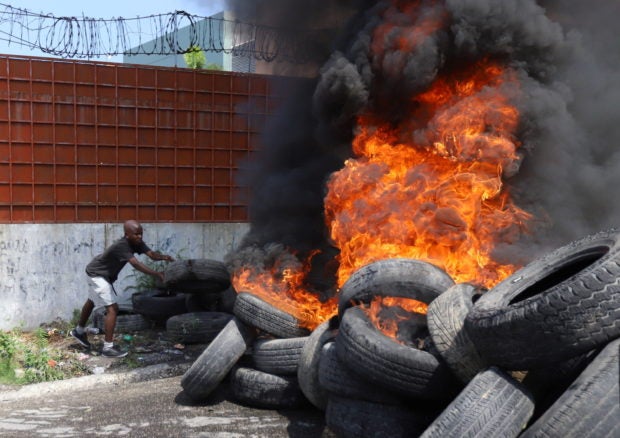 A demonstrator throws a tyre on a burning roadblock as Haitians mount a nationwide strike to protest a growing wave of kidnappings, days after the abduction of a group of missionaries, in Port-au-Prince, Haiti October 18, 2021. REUTERS

PORT-AU-PRINCE — Haitians on Monday mounted a nationwide strike to protest a growing wave of kidnappings, days after the abduction of a group of missionaries prompted FBI involvement and fueled international concerns over gang violence in the crisis-stricken Caribbean nation.

Ohio-based Christian Aid Ministries on Sunday said a group of its missionaries, 16 Americans and one Canadian, were in Haiti to visit an orphanage when they were abducted near the capital, Port-au-Prince. Security experts suspect the kidnapping was carried out by a gang known as 400 Mawozo.

Haitian authorities have remained silent about the incident, and the whereabouts of the group of missionaries, which includes women and children, is unknown.

A White House spokeswoman said Monday that the FBI was working with the U.S. diplomatic team in Haiti in efforts to locate and free those missing.

In a statement, the FBI confirmed its role. “The FBI is part of a coordinated U.S. government effort to get the Americans involved to safety,” it said, declining to give further details.

State Department spokesperson Ned Price said on Monday that the United States had dispatched a small team to Haiti to assist in efforts to locate and free the missionaries.

The missing missionaries have spotlighted a problem that has plagued Haiti – the hemisphere’s poorest nation – for years. Kidnappings have become more brash and commonplace in recent months amid growing political and economic crisis, with at least 628 incidents in the first nine months of 2021 alone, according to a report by the Haitian nonprofit Center for Analysis and Research in Human Rights, or CARDH.

Shops and schools in Port-au-Prince were shuttered on Monday as part of the strike first called by transportation industry leaders – whose workers are among the most common targets of gang abductions.

By early afternoon, billowing clouds of dark smoke towered above several sectors downtown as growing groups of protesters burned barricades on streets of the capital.

Private-sector businesses said they were joining the strike to protest the constant kidnappings and what they said was a systematic incapacity by the government to address it.

“This strike is our way of saying that we can’t take it anymore,” Toussaint told Reuters. “We live in fear.”

Toussaint said sales had plunged amid the threat of kidnapping and extortion that now haunt all workers and business owners.

“We can’t rely on the state, as job creators we are obliged to look after our own security,” he said.

Dozens of protesters also voiced frustration about the rising costs of phone service in front of a major mobile service provider.

Simmering anger and the country’s already precarious security situation took a turn for the worse following the July assassination of President Jovenel Moise and an earthquake in August that killed more than 2,000 people.

The growing crisis in Haiti has also become a major issue for the United States. A wave of thousands of Haitian migrants arrived at the U.S.-Mexico border last month, but many were deported to their home country shortly after.