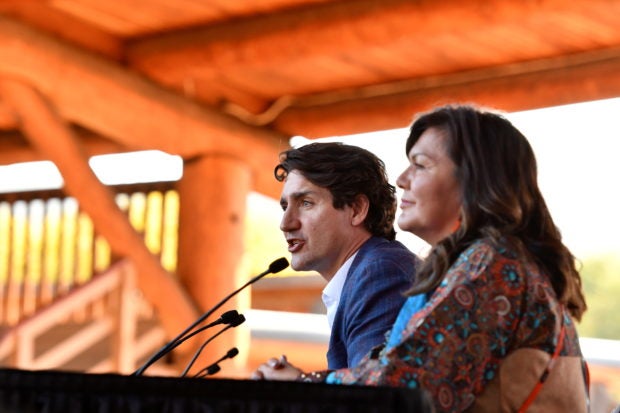 “I am here today to say I wish I had been here a few weeks ago, and I deeply regret it,” Trudeau told the community in British Columbia, adding he wanted to extend his hand to Tk’emlúps te Secwe̓pemc and all First Nations “who have every reason in the world to feel pessimistic and bleak about the future and instead choose hope.”

Trudeau apologized for going on a family vacation to Tofino, British Columbia, on Sept. 30 instead of visiting Tk’emlúps te Secwe̓pemc that day, which his own government had designated a federal holiday to underscore the legacy of the residential school system for indigenous children.

Tk’emlúps te Secwe̓pemc Kukpi7 Chief Rosanne Casimir said: “The shock, anger and sorrow and disbelief was palpable in our community” when members were told Trudeau was on vacation in Tofino. But she added: “Today is about making some positive steps forward and rectifying a mistake.”

Trudeau said the federal government would support community resources including a healing center. But he declined to say whether the government would appeal a federal court ruling that upheld a previous Human Rights Tribunal decision that ordered individual compensation for indigenous children and caregivers.

Tk’emlúps te Secwe̓pemc said in late May it had found what is believed to be more than 200 unmarked burials sites of indigenous children who were students at the Kamloops Indian Residential School.

Since May, hundreds more unmarked burial sites have been found. Ontario’s chief coroner said last week the province is investigating the remains of what is believed to be a 14-year-old child originally found by accident last year near the Mohawk Institute Residential School in Brantford, Ontario. Investigators are seeking details including the individual’s identity and the cause of death.