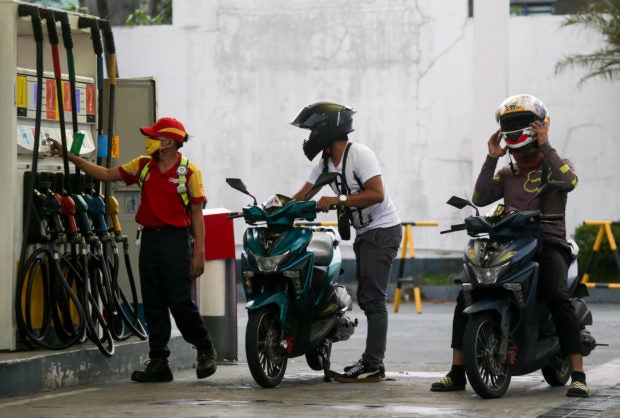 MANILA, Philippines — Consumers face the added burden of higher transport fares and rising cost of essential goods and services after prices of gasoline and other petroleum products have gone up by more than P7 a liter in less than two months.

The uptrend, which has so far gone uninterrupted for eight straight weeks, has added a total of P8.65 a liter to diesel pump prices. Since the start of 2021, diesel has seen a net increase of P18 a liter.

The eight-week rise in gasoline prices now totaled P7.20 a liter. Gasoline also saw a net increase of P19.70 a liter since the start of the year.

Pump prices have been going up since bad weather in the Gulf of Mexico disrupted petroleum production, and persisted as major crude oil producers, including the Organization of Petroleum Exporting Countries, Russia and their allies did not announce new plans to increase their output during their latest meeting held earlier this month.

The Department of Transportation (DOTr) on Monday said it was looking at fuel subsidies and direct aid to both public utility drivers and passengers to avoid having to increase fares for public transport.

In a statement, Transportation Secretary Arthur Tugade said the department believed it was “not the right time” to raise fares, with the country’s workforce still barely recovering from the impact of closures and restrictions to businesses and jobs.

“We need to balance the needs of drivers and the ability of our commuters during this pandemic,” he said. “So instead of directly increasing fares, we are pushing for financial aid for drivers and commuters.”

Among others, he said, they were looking at possible uniform discounts on public utility vehicles (PUVs) across all gas stations nationwide.

He also reminded fully vaccinated PUV drivers to avail themselves of existing discounts in selected gasoline stations and eateries by presenting their vaccination cards.

The DOTr has also written to the Department of Energy (DOE) about ways to mitigate the effects of the subsequent gas price increases on PUVs, including giving out fuel subsidies.

Meanwhile, the department also called on PUV drivers and operators to participate in its service contracting program, in which they would be paid by the government on a per-kilometer run basis.

Tugade said they were also studying increasing incentives per kilometer under the program.

Obet Martin, president of transport group Pasang Masda, said they respected Tugade’s statement but asked him to “consider also the needs of the drivers.”

“We respect his decision to mind the ordinary commuter but we are asking him to heed our plight as well. We drivers are doubly affected by the pandemic as well.”

Until now, PUVs are allowed to carry only half of its maximum passenger capacity in keeping with social distancing protocol. With rising gasoline prices, this limitation is “cutting deeper into our earnings,” Martin said.

He also asked the Land Transportation Franchising and Regulatory Board (LTFRB) to hear their pending petition for a fare increase “in the proper venue and in the proper way” instead of unilaterally announcing that they were not considering any adjustment.

In their petition, the groups said the current minimum fare was not enough to even cover jeepney operating costs since the pandemic started.

The last time the LTFRB approved a fare hike was in 2018, when diesel prices soared to P53 a liter.

The rising cost of petroleum products also prompted legislators to call on oil companies not to oppose moves to unbundle the prices of gasoline and other fuel products and be transparent with their pricing scheme.

Three party list lawmakers on Monday filed a measure seeking to institutionalize the unbundling of prices of fuel products and detail the actual costs of production.

The unbundling of oil prices would compel fuel companies to detail how price adjustments are computed. In opposing the move, oil companies claimed their competitors might get access to confidential information.

It spells out the requirements on prior notice and the unbundling of price adjustments for fuel products to include details such as import and freight costs, taxes and duties, and other costs for refining, storage, handling marketing and profit margins on a per-liter and per-product basis.

The measure imposes a fine of P50,000 to P350,000 or imprisonment of three months to a year for violations of its provisions.

It also gives the DOE and Congress the power to suspend or cancel the permit to engage in any activity in the downstream oil industry of noncompliant oil companies, retail outlets or dealers.

“This is all in the spirit of transparency since the country is still under a pandemic and every peso means so much more, especially to ordinary already economically burdened consumers,” Zarate said.

“Except for the international price of oil, nobody knows the actual expenses of oil companies in selling fuel such as refining cost, storage, transportation, salaries and advertising cost. The oil companies must inform the DOE and the public of this actual cost, so that we will know if they are overpricing or not,” he said.

The congressman added that the DOE has the power to demand this data from fuel companies under Republic Act No. 8479 or the Downstream Oil Industry Deregulation Act of 1998.

He also urged the DOE to be more proactive and support the proposed bill as there was nothing confidential about the actual cost of producing oil.

“They (DOE) can even lobby the President to classify this legislation as urgent along with other bills that would stop or at least mitigate oil price hikes,” Zarate added. INQ