DOLE, senators on ‘no jab, no pay’: Illegal, unacceptable 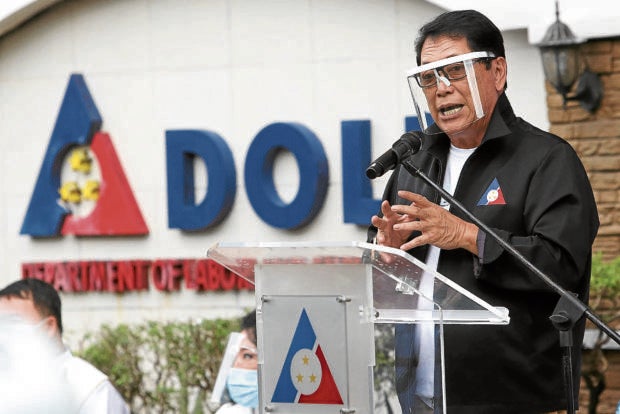 MANILA, Philippines — The Department of Labor and Employment (DOLE) will inspect establishments implementing a “no jab, no pay” policy and order the employers to release the salaries of their workers without requiring them to prove first their vaccination status, Labor Secretary Silvestre Bello III said on Monday.

Other than the order to pay the salaries, Bello did not say what penalties would be imposed on erring employers, although he said the Dole could garnish the company’s assets to pay the salaries of the employees if employers would not heed its order.

“But we hope it won’t come down to that. I know they are willing to pay even if they’re having a hard time,” he said.

The Trade Union Congress of the Philippines (TUCP) on Sunday said several workers have complained that they were required to prove they have already been fully inoculated before they could get their salaries.

The TUCP said the workers asked the organization to intervene on their behalf because they were afraid of getting fired if they complained.

The TUCP said it would coordinate with the Dole carefully in order not to jeopardize the employment of the complainants.

Bello said he had yet to receive any complaints but urged employees to report to them the names of the establishments.

He said the department would conduct a labor inspection even if the complainants wanted to remain anonymous.

“If an employee complains of not getting paid because he is not vaccinated, what we will do is we immediately inspect the [establishment] concerned. If found to have withheld the salary of the employee, we will immediately issue a compliance order,” Bello said.

Senators on Monday also decried the “illegal, inhumane and unacceptable” practice by some companies of withholding the wages of their employees to force them to get inoculated against COVID-19.

“Workers not being paid just because they are unvaccinated is patently illegal and inhumane, plain and simple. There should not be any strong-arming or shortcuts in employers convincing their workers to get vaccinated,” Sen. Joel Villanueva told reporters on Viber.

The chair of the Senate labor committee said the Dole should work instead to provide incentives to employers to encourage vaccination in the workplace.

“If work has been rendered, it is illegal to withhold salary regardless of the vaccination status of the worker,” he said in a statement. “A vaccination card is not a daily time record that is a primary document to prove that a work has been rendered. Once a work or service is rendered, a company has an obligation under the law to pay the employee.”

Section 12 of Republic Act No. 11525 or the COVID-19 Vaccination Program Act “clearly emphasized that ‘vaccine cards shall not be considered as an additional mandatory requirement for educational, employment, and other similar government transaction purposes,’” he said.

“While we do encourage all workers to get vaccinated, we must do it in a lawful manner. To withhold the salary of unvaccinated employees is outright illegal and inhuman,” Drilon said.

Sen. Risa Hontiveros said the purported scheme was not acceptable.

“It’s clear under the Labor Code that no employee can have their salaries forcibly held without authority. This type of discrimination against our workers should not be a requirement or part of policy considering that there is still a lack of vaccine supply in the country,” she said.

“This should not be allowed because only one day’s delay of wages for a worker is equivalent to hunger for the whole family,” she said.

“The employers, instead of using force, should work with the government in inoculating their workers and provide education regarding the effects and benefits of the vaccine,” Hontiveros said. INQ