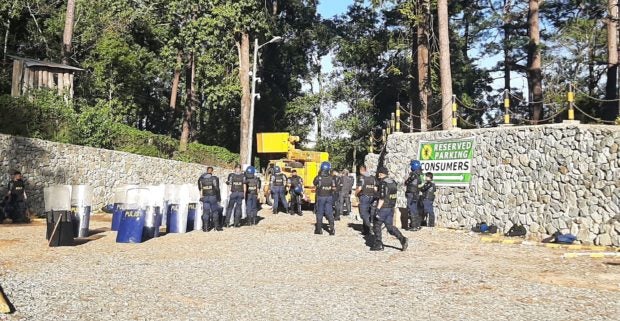 GUARDED About 50 policemen troop to the headquarters of Benguet Electric Cooperative (Beneco) in Barangay South Drive in Baguio City on Monday after they are deputized by the National Electrification Administration (NEA) to install Omar Mayo as NEA-appointed caretaker and lawyer Ana Maria Paz Rafael-Banaag as general manager. —PHOTO COURTESY OF BENECO EMPLOYEES LABOR UNION

BAGUIO CITY—Heavily armed police officers were sent by the National Electrification Administration (NEA) to the headquarters of the power utility serving Baguio City and Benguet province to help install a former Malacañang official as manager before the break of dawn on Monday.

About 50 policemen deployed by the Cordillera Police Office at Camp Dangwa in Benguet province allegedly broke into the offices of Benguet Electric Cooperative (Beneco) along Baguio’s South Drive to allow lawyer Omar Mayo, a NEA-appointed caretaker, to assume control over one of the country’s top-performing rural electric cooperatives.

The government troops also allowed lawyer Ana Maria Paz Rafael-Banaag to assume as the utility’s general manager despite a public outcry and protests over her alleged ineligibility to run Beneco.

Banaag, a former town mayor of Natonin in Mountain Province, resigned as assistant secretary of the Presidential Communications Operations Office after the NEA board designated her as Beneco’s new leader.

Employees did not report for work on Monday and instead staged a sit-down protest “because many were scared by [the presence of] policemen in full battle gear who broke into their offices past 2 in the morning,” said Mark Anthony Amisola, vice president of Beneco Employees Labor Union.

Bill payments were directed to alternative collection agencies, like banks and stores, while repairs of power lines continued, said incumbent general manager Melchor Licoben, who refused to vacate the post in favor of Banaag.

Licoben, the former deputy manager appointed to the top post by the Beneco board in 2020, has a pending petition before the Court of Appeals questioning the NEA’s decision naming Banaag as general manager. To diffuse the tension, Mayor Benjamin Magalong met Banaag, Mayo, and the police, who set up checkpoints along the road leading to Beneco.

“I wanted some assurance that this latest action would not disrupt the restoration of power services which were damaged by [Severe Tropical Storm] ‘Maring’ (international name: Kompasu),” he said.

The commotion was the latest in the feud between Beneco officials, employees, and member-consumers, and the NEA board after the state agency endorsed Banaag as its sole nominee for Beneco manager in May.

Banaag was appointed by the NEA board toward the end of August, but a majority of the Beneco board rejected her in a special session.

The dispute led to multiple lawsuits against NEA board members for allegedly breaking its own rules to accommodate Banaag’s application as Beneco manager.

Licoben argued that Banaag “does not have at least five years supervisory experience” nor the requisite “five-year experience with proven track record in the effective management of a successful electric utility-related business enterprise.”

Banaag has yet to make a statement but Mayo said on Monday that he was simply enforcing the Sept. 21 NEA Board Resolution No. 2021-106, which placed six members of the Beneco board of directors, board president Esteban Somngi and Licoben under a 90-day preventive suspension for rejecting Banaag.

The NEA resolution deputized the police to enforce the suspension and bar Licoben from Beneco premises to “protect the money of Beneco.”

Philippine Rural Electric Cooperative Association condemned the NEA and the police for “the unlawful act” of forcibly taking over Beneco, which was not an ailing cooperative as it has P4 billion in assets.