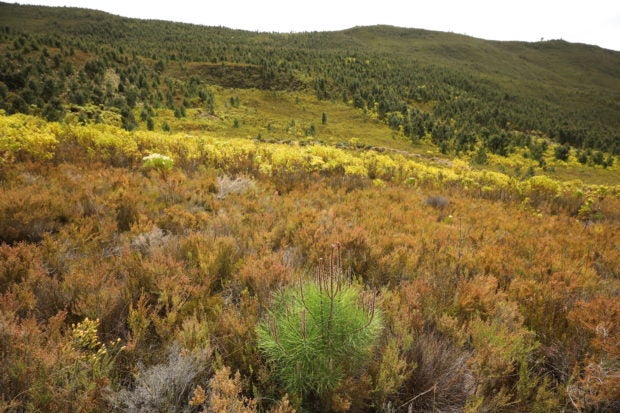 The crews are there to help to remove 54,000 hectares of alien trees by 2025, in the process reclaiming an estimated 55 billion liters of water lost each year – two months water supply for Cape Town.

“We can’t eradicate the pines, but we’ve got to manage and control them because the scale is too big. It’s a massive problem,” said Louise Stafford, South Africa’s program director at The Nature Conservancy, an NGO leading the process.

The control of the pines was fast-tracked in 2018, when Cape Town narrowly avoided having its taps run dry during a drought dubbed “Day Zero”.

Pine trees, first introduced from Europe during the 17th century, are now the backbone of South Africa’s commercial forestry industry. But their small seeds are easily dispersed by the wind and, with no natural enemies, they can spread rapidly from plantations to protected nature reserves, scientists said.

The alien trees also threaten native animals and plants in the Cape Floral Kingdom, where 70% of the plants, like the famous fynbos range of plants that are found nowhere else on the planet. A single pine tree consumes at least 20% more water than the fynbos.

The animals under threat include the Rough Moss frog, which was discovered in 2008, about 100km east of Cape Town on the slopes of Caledon’s Klein Swartberg mountains, which are drained by three vital rivers.

“Out of the five sites we are monitoring, three no longer have any (Rough Moss) frogs. If we do not remove this carpet of pine trees there is no doubt the frogs will become extinct,” John Measey, a zoologist at Stellenbosch University’s Centre for Invasion Biology, said.

Removing dense pine thickets is a huge task, but necessary.

“We are eating this elephant piece by piece,” Lambert Fick, chairman of the Klein Swartberg Nature Conservancy, said, as workers prepared ahead of a controlled fire to clear the area — a practice that some conservationists regard as risky.

Introducing moths, weevils or mites is also being considered to combat the trees, Andrew Turner, a restoration ecologist at government agency CapeNature, said.

He added, “It is not a silver bullet … (they) cannot get rid of existing infestations, but rather stop it spreading further”.