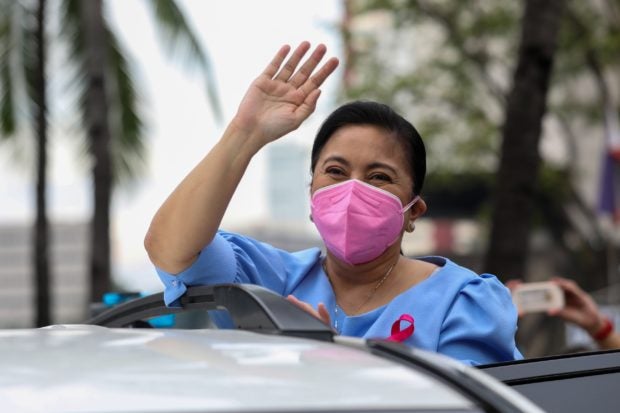 BACOLOD CITY––The “pink warriors” of presidential candidate Leni Robredo in Negros Occidental have been donating funds for her tarpaulins in the province.

The tarpaulins for Robredo with the message “Leni. Masaligan, Masandigan” have been sprouting in this city and in some parts of Negros Occidental.

Under the “buy one, give one” campaign, supporters pay P84 for the purchase of two 2 feet x 3 feet tarpaulins, said lawyer Gina Mirano-Jesena, who is promoting the presidential bid of Robredo.

“One tarpaulin is used by the supporters, and the other is given to those who cannot afford them,“ she said.

“We are throwing our support for Vice President Leni as she is the most credible among the candidates. She is the best choice,” Mirano said.

“She is someone who would protect our hard-earned freedom and preserve our democracy. Someone who will bring back decency in government and put an end to the culture of impunity.”