Government’s rosy news about the city’s rebuilding efforts is not their reality, residents say
By: Germelina Lacorte - @inquirerdotnet
Philippine Daily Inquirer / 04:35 AM October 18, 2021 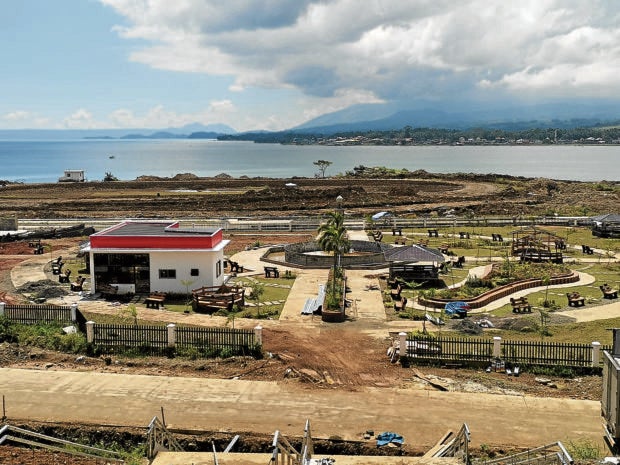 NEED TRADING PLACE, NOT PARK The Peace Park being built inside Marawi City’s ground zero is being questioned by some residents as it replaced what used to be the city’s mall, where traders used to display their wares for sale. —DIVINA M. SUSON

DAVAO CITY—Maranao leaders wanted what happened to Marawi City and how its rehabilitation is being handled to be a major election issue next year, as thousands of the displaced residents remained homeless and kept from returning home four years after the city’s so-called “liberation” on Sunday, Oct. 17.

Drieza Lininding, chair of Moro Consensus Group, said that four years after the government declared the city liberated from the Islamic State-inspired Maute and Abu Sayyaf groups that laid it under siege for five months, displaced residents still hoped for returning home.

But he said such a homecoming would no longer happen under the Duterte administration.

“We ran out of words to describe our frustrations,” he said, as the Task Force Bangon Marawi (TFBM) changed for the 10th time the target completion date of all infrastructure facilities, which preconditioned their return to the city’s so-called “most-affected area” (MAA) or ground zero, of the siege.

“We are not giving up hope for our return but not under the Duterte administration. It is clear now that they continue to lie to us and deceive the public on the real status of the Marawi rehabilitation. They did not care for our welfare. They deprived us of our basic rights. They did not ask for our consent nor consulted with us,” he said. “They did not liberate Marawi. In fact, they occupied Marawi and kept [us away from our homes].”He said the TFBM first made the promise to complete the Marawi rehabilitation in October 2019 but always failed to deliver and kept on moving the promised date.

“This year alone, they first promised that we could return in October, but then, they moved it again to December and now it would be in the middle of 2022 or the end of President Duterte’s term,” Lininding said. “They’ve already moved the date about 10 times and now, they would possibly be walking out of it unfinished.”

He said that what happened in Marawi and how it was handled would be a major election issue among the Maranaos as they would look it up among the agenda of candidates they would vote for in next year’s elections. “We want it to be a national issue during the elections. We will [see to it] that our colleagues will look for the Marawi agenda among the leaders that we will vote for in the next year’s elections,” he said. Another Maranao whose land had been affected by the siege, City Prosecutor Ibrahim Mimbalawag, said the voices of the displaced people, who remained homeless and impoverished, had been drowned in the government’s rosy news about the Marawi rehabilitation efforts.

He echoed what other Maranao leaders had earlier raised about the demolition of houses in the MAA without the consent of the owners.

Mimbalawag also questioned the building of the Peace Park in Barangay Datu sa Dansalan on the land where there used to be the Marawi mall, the place where traders displayed their goods. “[L]and [which] used to be for commercial purposes are now to be used for recreational purposes. Do IDPs prefer parks instead of a mall? I don’t think so,” he wrote.

He also questioned the building of the Grand Padian market in the village of Sabala Amanao on a private land owned by some of the displaced residents and the demolition of the “masjids” in Barangay Sabalao, Barangay Datu Naga and the Marcas Masjid, which were not rebuilt.

But most of all, he questioned why most of the IDPs were still kept from returning home to rebuild their houses.

We know who you are

“Candidates will always make promises but we should know who are the ones to support,” Lininding said.

He said Marawi’s current set of leaders had been part of a problem instead of a solution because they had to ally themselves with the administration for political survival.

He said close to 100,000 families, mostly from the 24 barangays declared as the MAA was still kept from returning home prior to the completion of the infrastructure facilities that the TFBM promised to build. So far, there were already 100 families who were issued certificates of occupancy, which meant they were already allowed to return, and 2,000 other families who were issued building permits, hence, were allowed to start rebuilding their homes—but there were others who were not aware yet that their houses might have already been demolished. INQ