Pampanga makes list of top earners due to quarry income 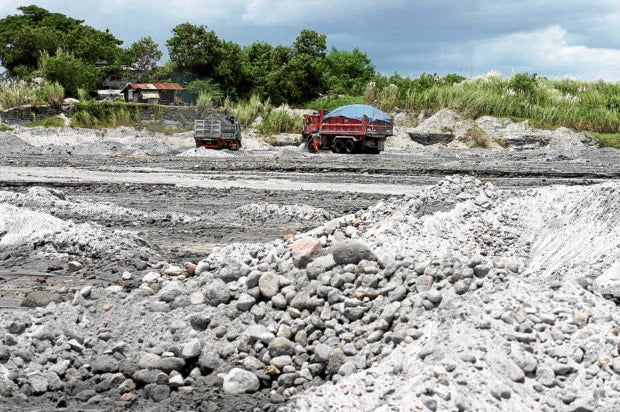 DISASTER TO RESOURCES Sand and gravel spewed out by Mt. Pinatubo in its June 1991 eruption that came down as lahar, which buried houses and people, has become a multimillion-peso industry for the construction sector, bringing also income to local governments that impose a quarry tax. —TONETTE OREJAS

The Bureau of Local Government Finance (BLGF) placed Pampanga among the Top 10 after it ranked the 81 provinces according to the growth of their LSR, their collection efficiency, and for incurring the highest nominal LSR in 2019.

The LSR is the sum of real property tax, local business tax, fees and charges, and income from economic enterprises.

The BLGF awarded the certificates of accomplishment of the top local governments in a virtual event on Friday.

The province also accomplished a 109.2-percent rate in collection efficiency and fulfilled the target collection of P1.5 billion, making it Top 8 in the category.

Pampanga took the tenth spot among local governments with the highest nominal LSR, the BLGF announced this week on its website.

Sand quarrying has become a major source of income for the province by imposing a tax on the extraction of its huge deposit of sand and gravel spewed out by Mt. Pinatubo when it erupted on June 15, 1991.

Reforms introduced by Gov. Dennis Pineda raised P289.7 million in quarry earnings from July to December 2019 by collecting a P150 sand tax for every truckload (10 to 13 cubic meters) of sand and gravel taken from the province; a P250 administrative fee for every minimum weight of 10 to 13 cu. m; and other charges, according to the monitoring agency Kapampangan a Lulugud at Matapat.

Quarry revenues reached P609.2 million throughout 2020, except for April when the Luzon lockdown was enforced. The province earned P606.2 million from January to September this year.

The government collection for the last 20 months summed up to P1.505 billion, with sand tax earnings divided among barangays, cities or towns, and the province at a 40-30-30 percent sharing arrangement, as mandated by the Local Government Code of 1991.

Pineda used the quarry revenues to finance additional health services and to purchase supplies in the province’s continuing response to COVID-19, said Provincial Administrator Charlie Chua in a telephone interview on Sunday. INQ