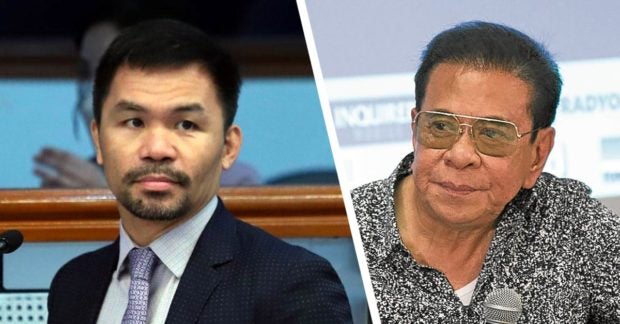 MANILA, Philippines — Senator Manny Pacquiao said on Friday that Narvacan, Ilocos Sur Mayor Luis “Chavit” Singson has withdrawn his support for him after their disagreement on the imposition of higher excise taxes for alcohol and tobacco products.

According to Pacquiao, Singson left him hanging after he stood for “what is right.”

(He left me hanging because I stood for what is right and prioritized the welfare of Filipinos.)

Singson was conspicuously absent in Pacquiao’s last boxing fight with Yordenis Ugas of Cuba last August, prompting speculations of a possible rift between the Pambansang Kamao and his self-confessed benefactor and political mentor.

The veteran politician had been a permanent fixture in all of Pacquiao’s international fights and even in his political and personal endeavors.

(He left me hanging because he told me at first that he will support me but did not do so after I stood for what is right. This started when he talked to me about the tobacco tax increase. I did not follow his request.)

Pacquiao said Singson talked to him twice about the issue. However, Pacquiao said he continued pushing for higher alcohol and tobacco taxes as the government needs more funds.

(That happened twice. He talked to me twice but I did not heed his request. I said I will push for it because this is the only way I see that can raise government funds and help Filipinos.)

Pacquiao said a minimum of P120 billion are being added to government funds each year due to higher taxes on the said “sin” products.

Singson has yet to respond to INQUIRER.net’s request for comment.