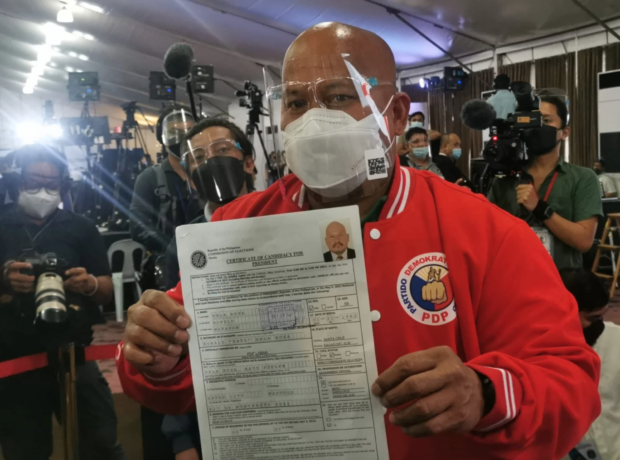 MANILA, Philippines — The ruling party PDP-Laban, which made popular the substitution of candidates during the elections, is not making a “mockery” of the electoral process, one of the party officials said Thursday.

PDP-Laban Secretary General Melvin Matibag rebuffed speculations that their presidential candidate Ronald “Bato” dela Rosa only served as a “placeholder” for Davao City mayor Inday Sara Duterte-Carpio, who has opted to seek reelection as mayor in her city, despite prodding from her father, President Duterte, and other officials.

“If the real intent of the Omnibus Election Code envisioned only those who will die along the way or be disqualified, then why didn’t the lawmakers just state so? It’s that simple. If the law is clear there should be no room for interpretation,” Matibag said.

“It’s not a mockery of the elections law if the political parties use every available legal option, or time, for them to finally decide the candidates to field,” Matibag said.

While the certificate of candidacy (COC) for the 2022 national elections only ran from October 1 to 8, the substitution deadline is until November 15. Only when the substitution period lapsed could the Commission on Elections (Comelec) finalize the list of candidates.

This means those who filed their COC can still withdraw them and they will be replaced by another candidate from the party.

While still insisting that Dela Rosa is not a “placeholder” candidate, Matibag said there is nothing wrong should the party decide to have a substitute for the senator on or before November 15.

Dela Rosa himself has said previously that it would be better if Duterte-Carpio would run in his stead for the 2022 presidential race.

“Any political party can opt to utilize the rule on substitution as it is allowed by law. It is available to everyone without distinction. A mockery is when rules are not applied equally. And every party is entitled to employ its own political strategies,” Matibag said.

“Just like the Liberal Party Chairperson choosing to run as an independent candidate and changing her color from yellow to pink. In short, anyone in the political game may employ a strategy as long as it is within the bounds of the rules,” he added.

House Deputy Speaker Rufus Rodriguez on Wednesday filed a bill pushing to prohibit candidate substitution due to withdrawal during elections in a bid to end the “mockery of the election process.”

According to Rodriguez, the Omnibus Election Code currently allows the substitution of a candidate in case of death, disqualification or withdrawal of another aspirant.

“While there is nothing wrong with substitution in case of death or disqualification which is justifiable, substitution because of withdrawal, or what others call voluntary substitution, may pose serious questions and may lead to the manipulation and mockery of the election process,” Rodriguez said.

“Withdrawals could lead the voting public to believe that the candidate who withdrew, or even the political party or substituting candidate, is not really serious,” he added.

In the 2016 presidential elections, Duterte himself substituted for now Interior Undersecretary Martin Diño, who then initially ran as president of PDP-Laban.