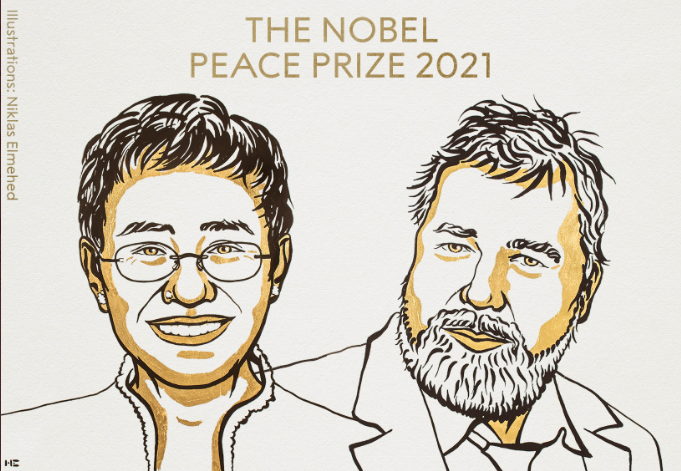 MOSCOW — President Vladimir Putin said Wednesday that the Nobel Peace Prize awarded to Russian newspaper editor Dmitry Muratov would not “shield” him from being branded a “foreign agent” if he breaks the law.

The recognition for Muratov came as dozens of Russian journalists and a number of leading independent outlets have this year been hit with the “foreign agent” designation.

A term with Soviet-era undertones, the status forces individuals or organizations to disclose sources of funding and label all their publications, including social media posts, with a tag or face fines.

“If he does not violate Russian law, and if he does not give a reason to be declared a foreign agent, then he will not be,” Putin said at a forum in Moscow.

But he warned the journalist against trying to hide behind the Nobel prize and “using it as a shield” to violate Russian law and “attract attention to himself”.

Muratov was among a group of journalists who founded Novaya Gazeta in 1993 after the fall of the Soviet Union.

The paper has become one of the few remaining independent voices in a tightly controlled media landscape.

Kremlin critics say authorities are waging a campaign against independent and critical media, with many branded foreign agents and others forced to shut down.

After receiving the award on Friday, Muratov said he was not sure how it would influence “censorship”. The same day, the justice ministry added nine more people to its list of foreign agents.