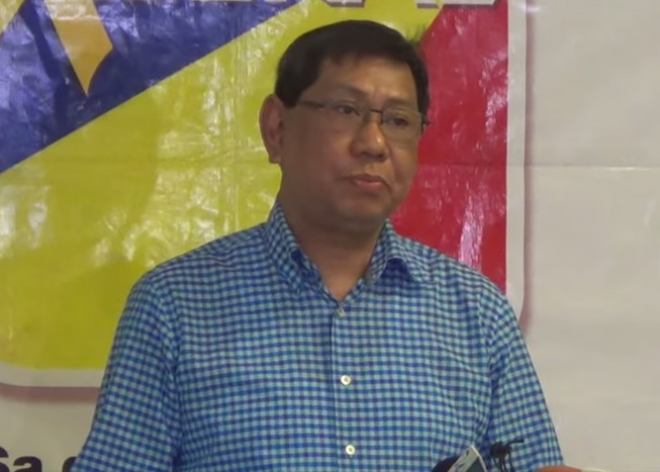 FILE PHOTO: This was grabbed from a video taken when Caloocan Rep. Edgar Erice was still Liberal Party chairman for political affairs, or before he jumps ship to join the Aksyon Demokratiko party of presidential candidate Manila City Mayor Francisco “Isko Moreno” Domagoso. From INQUIRER.net video

According to the former Liberal Party (LP) official, what Robredo told them when he was still with the opposition party was that they were pursuing unity dialogues with other presidential aspirants like Manila City Mayor Francisco “Isko Moreno” Domagoso to form a coalition within the opposition. Robredo serves as chairperson of LP.

“Ang sabi sa amin ni Vice President Leni, she will unify the opposition, kaya nga kinakausap niya,” Erice said in an interview with ABS-CBN News Channel’s Headstart. “Pero how can you unify the opposition when deep inside you, meron kang desire — or maybe ‘wag nang desire, you are entertaining the idea of running for president?”

(What Vice President Leni told us was that she will unify the opposition, that’s why she was doing the discussions. But how can you unify the opposition when deep inside you, you have a desire — or maybe not a desire, you are entertaining the idea of running for president?)

(So it seems to border on intellectual dishonesty, right?  How can you unify Senator Manny Pacquiao and Isko when deep within you, you are mulling to run for president. Actually, while talking to Isko, they are really launching a nationwide campaign for Leni, on radio, on media. So how can you unify if you have something else deep inside?)

(I think so, because she said that a lot of people are convincing her to run, but those who are convincing her are on her side. She is their leader right, and she is also the one who said that if she joins the presidential race, she might reduce the votes of other candidates.)

Previously, Robredo said she is willing to back out from the presidential race if it would be the best scenario for the opposition. In one occasion, the Vice President even admitted that she is prepared to receive the backlash if she no longer aspires to be president.

Erice jumped to Moreno’s Aksyon Demokratiko after being with LP for 18 years. He explained that he left LP because the party now lacks plans and appears to be fading into irrelevance – which he attributed to Robredo’s supposed leadership problem.

Erice said this was evident in Robredo’s decision to run as an independent candidate even if she is a top leader of LP.

READ: Proud dilawan no more: Why Erice left LP and why Robredo isn’t the right leader

But he was countered by one of his former colleagues in LP, former Ifugao Rep. Teddy Baguilat, who threw shade at Erice’s decision to join Moreno’s party. Baguilat said that some people prefer a leadership of a traditional politician and someone with the machinery, as Robredo’s brand of leadership is far from being personality-based.

Before the filing of certificates of candidacy, Robredo and Moreno discussed a possible united coalition for the 2022 polls. It can be recalled that the unity talks failed, with both officials now vying for the presidency.