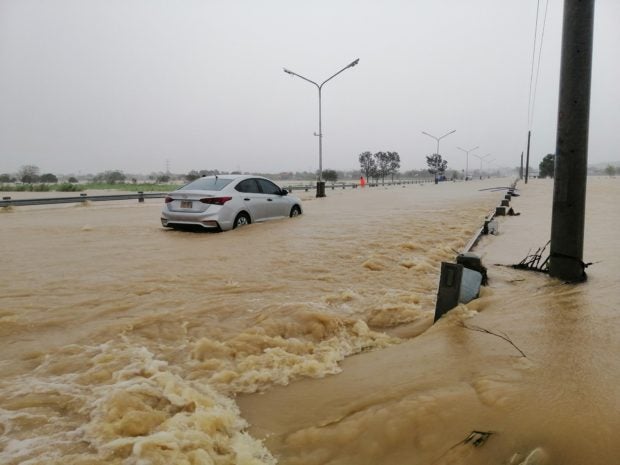 In a press briefing, Mark Masudog of the Office of the Civil Defense in Ilocos said rescue operations in Sta. Lucia, Sta. Cruz, Sta. Maria, Santiago, Narvacan towns, and the city of Candon were ongoing.

Masudog said the number of trapped villagers was not immediately known.

Maring had damaged several public infrastructures in the province, including the Bayugao Bridge along Manila North Road in Sta. Cruz town, which was about to collapse due to nonstop rains and winds overnight.

The road was unpassable, according to the Department of Public Works and Highways.

Sta. Maria town residents were also trapped since 3 a.m. Tuesday on their roofs due to floodwaters. Some of them had been rescued by noontime, according to rescue personnel.

Rescue personnel in Candon on Monday morning also retrieved a dead body of an unidentified woman at the seashore in Patpata Segundo village.

In Ilocos Norte, residents of Sitio Taburtit, Purok Namnama, Barangay San Lorenzo in Bangui were evacuated due to a storm surge, the provincial government reported.

At least 43 persons in low-lying areas in the town had been evacuated.

In La Union, 299 individuals had been evacuated since last night, said Masudog.