Businesses push for more operational capacity in last quarter of 2021 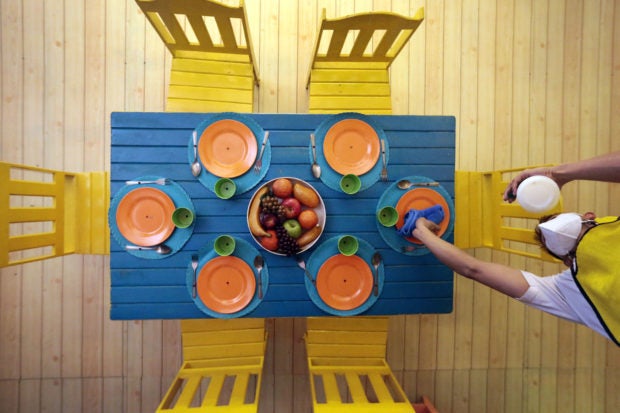 REOPENING AN UPENDED WORLD A Marikina City restaurant offering some visual mischief on its menu—a dining set mounted upside down from the ceiling—prepares to welcome the return of dine-in customers, though still at a limited capacity, after being shuttered for months due to community quarantine restrictions. —GRIG C. MONTEGRANDE

MANILA, Philippines — Businesses in Metro Manila are pushing to have increased operational capacity for their customers in the last quarter of 2021 for them to be able to recover their losses, Presidential Adviser for Entrepreneurship Secretary Joey Concepcion said Tuesday.

With the present allowed operational capacity, which is at 30%, businesses are still struggling to recover their income.

If they are allowed to amp up their operational capacity to at least 50%, they can at least be able to “pay their obligations,” said Concepcion.

“Sa 50%, you can earn some money pero hindi pa talaga ano ‘yan, but at least they would be able to have enough to pay for their obligations and hopefully carry them forward until 2022,” he added.

(With 50%, you can earn some money but not really but at least they would be able to have enough to pay for their obligations and hopefully carry them forward until 2022.)

Concepcion earlier said businesses are appealing to the government to place Metro Manila under the more relaxed alert level 3 in the last quarter of the year to allow establishments to accept more customers and help them recover from their losses.

Ultimately, businesses are hoping that the government would eventually ease Metro Manila to the least restrictive Alert Level Level 1 and be allowed to open 70% capacity.

In a briefing on Monday, Malacañang said there is a “high chance” that the government would downgrade the alert level over Metro Manila.