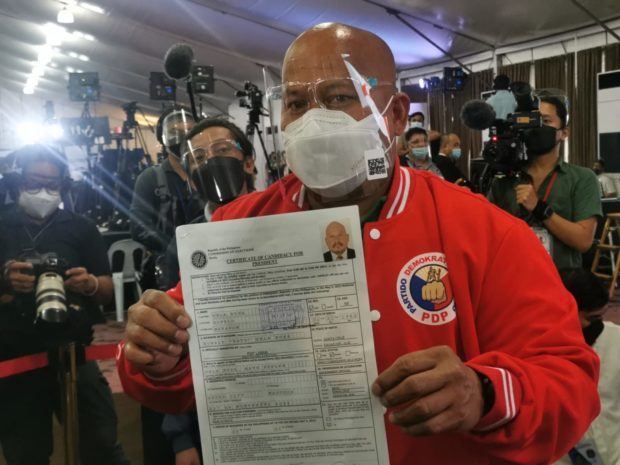 MANILA, Philippines — Sen. Ronald “Bato” dela Rosa’s last-minute pitch for the presidency—which he admitted to on Monday morning, two days after he filed his certificate of candidacy (COC)—stunned rights groups who said his run was a “mockery of elections.”

By his own admission, Dela Rosa got the call from administration party leaders to rush to the Commission on Elections (Comelec) venue at Sofitel Hotel in Pasay City on Friday to file his candidacy as their standard-bearer only two hours before the 5 p.m. deadline.

In separate statements, rights groups said Dela Rosa’s “surprise” run was a “shameless tactic … taken straight from President Duterte’s playbook” when he substituted and ran for president in 2016.

For rights group Karapatan, that Dela Rosa delayed his candidacy to avoid public scrutiny was a “recurring exercise especially with his hand in implementing the Duterte government’s murderous campaigns” such as the drug war, the antiterror bill and his hand in the revival moves for the death penalty.

“If Bato will indeed pursue his candidacy, his bid for the presidency in the 2022 elections is to not only continue the bloody legacy of the Duterte administration but to shield himself and others in the government including the President from accountability and prosecution,” said Cristina Palabay, secretary general of Karapatan.

She was referring to the ongoing investigation by the International Criminal Court (ICC) into alleged crimes against humanity conducted under the drug war. Both Dela Rosa and Duterte have been namechecked by the ICC as it proceeds toward the determination of the most responsible for the said crimes.

Speaking to reporters in an online interview, Dela Rosa revealed the extent of disarray within the PDP-Laban (Partido Demokratiko Pilipino-Lakas ng Bayan) as he talked about how he came to be the surprise presidential candidate of the ruling party on Oct. 8, the last day of filing.

‘Willing to give way to Sara’

“I received the call at 3 p.m. telling me to file my COC. I said, ‘may I know the reason?’ The PDP-Laban leadership, [Energy Secretary Alfonso] Cusi, said, ‘we couldn’t find anybody else who could continue President Duterte’s legacy but you,’” he recalled.

Because he arrived late, he ended up missing the photo opportunity with Duterte, who went personally to the Comelec venue to endorse the candidates fielded by the Duterte-Cusi wing of the PDP-Laban.

The senator also reiterated that he was open to stepping down if directed by his party to give way to a non-PDP-Laban member, Davao City Mayor Sara Duterte, who, per Comelec rules, could still join the ruling party and substitute for Dela Rosa.

“I’m only practical since Mayor Sara’s winnability is very high so I am willing to give way for her if the people don’t want to accept me as a serious candidate,” he said, referring to the younger Duterte’s top ranking in recent preelection polls.

But the ruling PDP-Laban faction backed by Duterte insisted that Dela Rosa wasn’t a “last-minute choice” and a placeholder for someone else. INQ