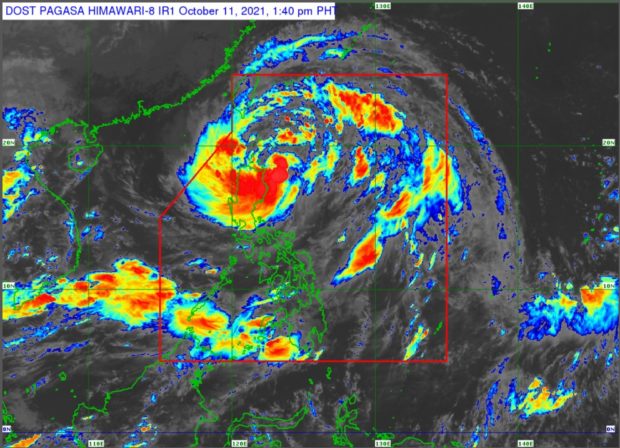 Based on the state weather service’s 2 p.m. tropical cyclone bulletin, Maring was moving westward at 20 kilometers per hour (kph). At 1 p.m. Monday, it was located 150 kilometers east-northeast of Aparri, Cagayan or 170 kilometers east southeast of Calayan, Cagayan, packing maximum sustained winds of 95 kph near the center and gustiness of up to 115 kph.

Maring will cause heavy to intense with at times torrential rains this Monday afternoon over Batanes, northern portion of mainland Cagayan including Babuyan Islands, Ilocos Norte, Ilocos Sur, Apayao, Abra, Mountain Province, and Benguet, according to Pagasa.

The rest of mainland Cagayan, Cordillera Administrative Region, and Ilocos Region may experience moderate to heavy with at times intense rains in the same period as well, it added.

Light to moderate with at times heavy rains, on the other hand, may prevail over Central Luzon and the rest of Cagayan Valley, it also said.

As for the southwest monsoon being enhanced by Maring, Pagasa noted that Visayas, Zamboanga Peninsula, Palawan, Occidental Mindoro, and Oriental Mindoro residents could expect rain because of it within the next 24 hours.

Meanwhile, people in Metro Manila may experience partly cloudy to cloudy skies with isolated rain showers due to localized thunderstorms between Monday afternoon and 4 a.m. Tuesday. 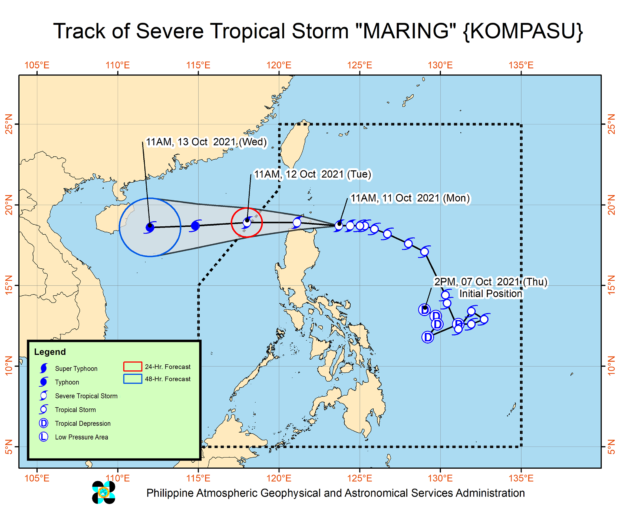 Pagasa said Maring is expected to leave the Philippine area of responsibility or PAR by Tuesday morning. Until then, tropical cyclone wind signals remain in effect in these areas:

Signal No. 2 (damaging gale-force to storm-force winds prevailing or expected within 24 hours)

Signal No. 1 (strong winds prevailing or expected within 36 hours):

‘Maring’ intensifies into severe tropical storm, Signal No. 2 in 9 parts of Luzon