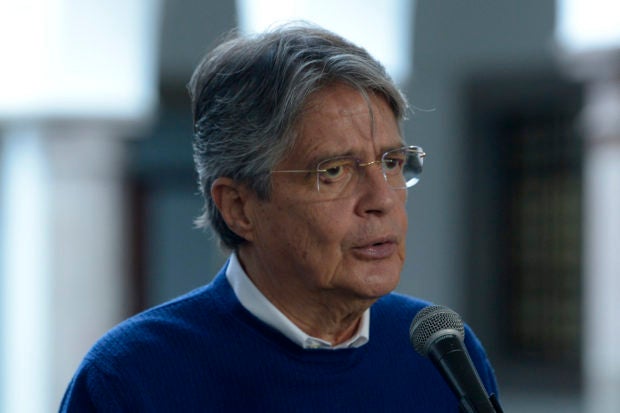 Ecuador’s President Guillermo Lasso speaks after meeting with leaders of the Confederation of Indigenous Nationalities of Ecuador (CONAIE), at the Carondelet Palace in Quito, on Octubre 4, 2021. AFP

QUITO — Ecuador’s legislature on Sunday voted to open an investigation into whether President Guillermo Lasso broke the law by keeping assets in tax havens, after the Pandora Papers leaks.

Lasso, Ecuador’s first right-wing president in 14 years, is among scores of politicians, businessmen and celebrities who appear in the Pandora Papers, an investigation by an international consortium of journalists that exposed secret offshore accounts.

The probe of Lasso’s activity will be conducted by the country’s Constitutional Commission within 30 days, the legislature said in a statement.

The investigation is meant to determine whether the 65-year-old president “may have breached” the norm that “prohibits candidates and public officials from having their resources or assets in tax havens,” the legislature said.

According to the Pandora Papers, Lasso controlled 14 offshore companies, most of them based in Panama, and closed them after the passage of a law in 2017 that prohibited presidential candidates from having companies in tax havens.

Lasso, who took office in May, has said that years ago he had “legitimate investments in other countries” and that he got rid of them to compete in the presidential election.